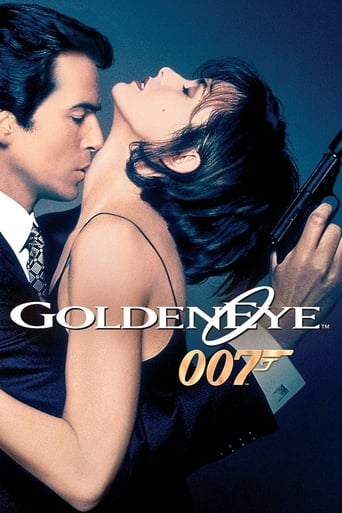 Dónal Kennedy almost 2 years ago
A quantum leap in many respects - Brosnan fits the role like a glove.

Gabi Lener almost 5 years ago
Janssen was the only proper performance, so much cheese+stereotypes it got me wondering

Josh Steadman over 6 years ago
A great Bond film. Brosnan is a good Bond, but this is the only one with him that is good.

Jonathan Evans over 6 years ago
That tank scene... phowah! To kick off a ridiculous amount of Sean Bean death.

Tavis over 6 years ago
The best thing about GoldenEye is the genre-defining N64 game.

Niall Rutter almost 7 years ago
The best of the Brosnan set. And such a nostalgic piece of gami... I mean cinema.

Taylor Reginald Wright almost 7 years ago
An outstanding and character-driven James Bond film that manages both style and substance.

Charlie Gleason almost 7 years ago
I can't believe they made a movie of the Nintendo 64 game!

Brendan Keevers 7 years ago
Still one of the best bond films. The broads, the class, the action. Gold.

Adrianus Kleemans 7 years ago
One of my favourite 007s. The opening with the bungee jump in verzasca valley is legendary

John Barton 7 years ago
I confused my fondness for the N64 game with enjoying this film.

Dylan Clites over 7 years ago
Not the best Bond film but far from the worst. Not a big fan of Brosnan.

Liam Price over 1 year ago

Daniel Rouco over 1 year ago

Juan Ignacio Sada over 1 year ago
GoldenEye (1995) is the seventeenth spy film in the James Bond series, and the first to star Pierce Brosnan as the fictional MI6 agent James Bond. The film was directed by Martin Campbell and is the first film in the series not to take story elements from the works of novelist Ian Fleming. The story was conceived and written by Michael France, with later collaboration by other writers. In the film, Bond fights to prevent an arms syndicate from using the GoldenEye satellite weapon against London in order to cause a global financial meltdown. GoldenEye was released in 1995 after a six-year hiatus in the series caused by legal disputes, during which Timothy Dalton resigned from the role of James Bond and was replaced by Pierce Brosnan. M was also recast, with actress Judi Dench becoming the first woman to portray the character, replacing Robert Brown. GoldenEye was the first Bond film made after the dissolution of the Soviet Union and the end of the Cold War, which provided a background...
Read more on