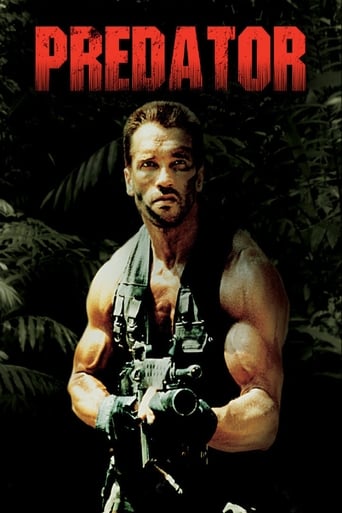 Davis Keck over 3 years ago
The epitome of 80s action: Sweaty muscles quipping with guns in the jungle.

Paul Lanoue over 4 years ago
Jesse Ventura right before he went down that cooky road to where he is now, also arnold

Robert Stuart over 5 years ago
My review ain't got time to bleed.

SpikeDaCruz over 5 years ago
Predator is the best creature ever made without CGI. Best Sci-Fi movie from all times.

janvanham over 5 years ago
If it bleeds, we can kill it. Great sf-action.

Ryan Boucher 6 years ago
Get to da choppa!

Brad Ludwig 6 years ago
A classic! Still enjoyable after many, many views.

Luis Uribe over 6 years ago
One of the first movies i saw on pirate cable.

JustinMFnTime almost 7 years ago
A Classic film. Must Own and Must see. Suspense and Thrilling ride through the Jungle

Austin almost 7 years ago
A classic 80's action film. One of Arnold's best!

Anthony Colombi almost 7 years ago
GET TO DA CHOPPA !!

Emma Jun 7 years ago
Starts off as an overly macho army flick and descends into a tense alien standoff. Coolio!

Grant davies 7 years ago
This film was just made for Arnie. Brill

Alexandre Brisson over 7 years ago
This cannot compare to the Alien Quadrilogy. Why would they mesh the two?
Predator is a 1987 American science fiction action film directed by John McTiernan, starring Arnold Schwarzenegger, Carl Weathers, Jesse Ventura, and Kevin Peter Hall. It was distributed by 20th Century Fox. The story follows an elite special forces team, led by 'Dutch' (Arnold Schwarzenegger), on a mission to rescue hostages from guerrilla territory in Central America. Unbeknownst to the group, they are being hunted by a technologically advanced form of extraterrestrial life, the Predator. Predator was scripted by Jim and John Thomas in 1985, under the working title of Hunter. Filming began in April 1986 and creature effects were devised by Stan Winston. The film's budget was around $15 million. Released in the United States on June 12, 1987, it grossed $98,267,558. Initial critical reaction to Predator was mixed, with criticism focusing on the thin plot. However, in subsequent years critics' attitudes toward the film warmed, and it has appeared on a number of "best of" lists. Two...
Read more on