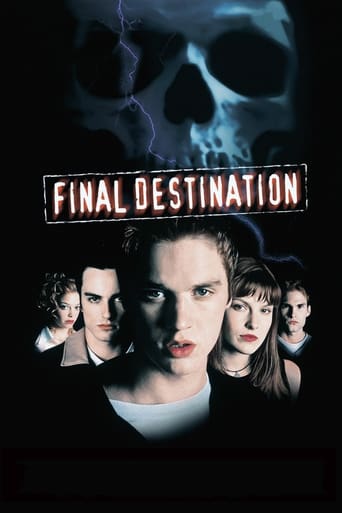 Rachel Marshall over 3 years ago
Was expecting more gore but maybe later ones are worse. Interesting idea but not great.

Lou 7 years ago
I liked this 1st one a lot.The rest are sadly not up to par because you know what's coming

nazanin zakizadeh over 2 years ago

Lauren Armstrong over 2 years ago

Yalini over 3 years ago

Parker Childers over 4 years ago
Final Destination is a 2000 supernatural slasher film written and directed by James Wong. The film was co-written by Glen Morgan and Jeffrey Reddick, both of them having previously worked with Wong in the TV series The X-Files. The film stars Devon Sawa, Ali Larter, Kerr Smith and Tony Todd. Sawa portrays a teenager who "cheats death" after having a premonition of himself and others perishing in a plane explosion and uses it by saving himself and a handful of other passengers, but is continued to be stalked by Death by claiming back their lives which should have been lost in the plane. The film was based on a spec script for The X-Files written by Reddick. After his co-writers admired his screenplay, writing partners Wong and Morgan were interested and agreed to direct a feature film with it, marking Wong's film directing debut. Filming took place in New York and Vancouver. Final Destination was released on March 17, 2000, and was a financial success, making $10 million on its opening...
Read more on