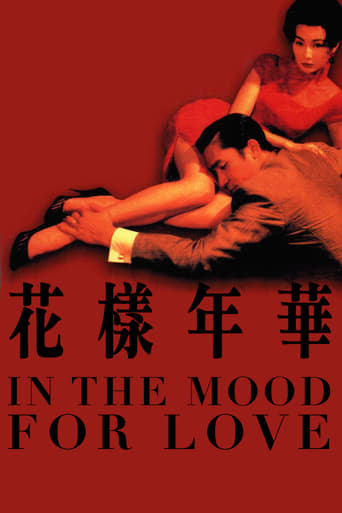 Itzel Amieva 6 months ago
What an outstanding film! Every single frame is meticulous and beautiful!

Alexandra Sundarsingh 6 months ago
Beautifully shot. Amazing use of light, and a great soundtrack.

Silvie 3 years ago
A most beautiful film

Natalie over 3 years ago
beautiful, obviously, generally loved the story too, but a bit tedious

Robyn Hamilton 4 years ago
Objectively a masterpiece but personally I couldn't bring myself to give a shit.

Miles Ross 4 years ago
Perfect and detailed almost to a fault.

Austin over 6 years ago
One of the best movies I've ever seen.

Akanksha Dhyani 7 years ago
If I said this film changed the way I look at cinema, I would not be exaggerating.

Marcel over 7 years ago
Best romance I have ever seen. Lyrical filming, hauntingly beautiful score, a masterpiece.

emilio murillo over 7 years ago
WKW's directing is obsessively meticulous in this outstandingly subtle and aesthetic film.

Nguyen Hang over 3 years ago

Fernando Olivas over 3 years ago

Redshirt Antilles over 3 years ago

Daniel McCoy over 3 years ago

Sparky over 3 years ago
In the Mood for Love (Traditional Chinese: 花樣年華; Simplified Chinese: 花样年华; Pinyin: Huāyàng niánhuá; Yale: Fa yeung nin wa (Fā yeuhng nìhn wàh), literally "the age of blossoms" or "the flowery years", which is a Chinese metaphor for the fleeting time of youth, beauty and love) is a 2000 Hong Kong film directed by Wong Kar-wai, starring Maggie Cheung and Tony Leung. The film premiered on May 20, 2000, at the 2000 Cannes Film Festival, where it was nominated for the Palme d'Or. The film's original Chinese title derives from a song of the same name by Zhou Xuan from a 1946 film. The English title derives from a Bryan Ferry cover of the song "I'm in the Mood for Love" that is also used in the film. The film forms the second part of an informal trilogy, together with the first part Days of Being Wild (released in 1991) and the last part 2046 (released in 2004). The film takes place in Hong Kong, 1962. Chow Mo-wan (Tony Leung), a journalist, rents a room in an apartment of a building on the...
Read more on