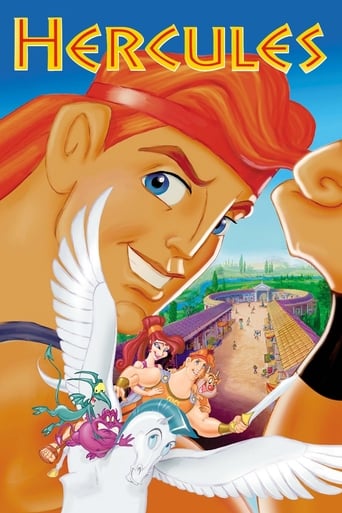 Brandon Keck over 2 years ago
A lot of fun from beginning to end, but it doesn't say anything important.

Amanda Mathews almost 3 years ago
Enjoyable and hysterical. Disney at its peak.

Anja Waber over 4 years ago
I love those movies

Sasha 5 years ago
Not as great as I imagined, unfortunately.

Randi Steers over 5 years ago
The soundtrack, cast and unique visual style make this film an unforgettable classic.

Ashley Beacom almost 6 years ago
Never watched as a child, it just didn't live up to the hype

Melissa Høegh Marcher 6 years ago
So many great characters.

Justin L. Clemons over 6 years ago
Anytime someone brings up Hercules, I think of this cartoon.

Lizzie over 6 years ago
This movie is best watched with friends who will pick apart every unbelievable detail.

Jane Kenney 7 years ago
Pretty good songs, great family movie, and a great kid version of the story of Hercules.

Tijmen Raasveld 7 years ago
I liked it... too bad nobody else did.

Emily Olejniczak over 7 years ago
The sass is real in this movie. One of my favorite non princess animated Disney films.

Charlie Alcock over 7 years ago
One of my favourite films as a kid. Haven't seen it in a long time.

Dylan Clites almost 8 years ago
Hercules is a super fun ride that fits in perfectly with the pantheon of 90s Disney.
Hercules is a 1997 American animated film produced by Walt Disney Feature Animation and released by Walt Disney Pictures. The thirty-fifth animated feature in the Walt Disney Animated Classics series, the film was directed by Ron Clements and John Musker. The film is based on the legendary Greek mythology hero Heracles (known in the film by his Roman name, Hercules), the son of Zeus, in Greek mythology. Though Hercules did not match the financial success of Disney's early-1990s releases, the film received positive reviews, and made $99 million in revenue in the United States during its theatrical release and $252,712,101 worldwide. Hercules was later followed by the direct-to-video prequel Hercules: Zero to Hero, which served as a midquel to Hercules: The Animated Series, a syndicated Disney TV series focusing on Hercules during his time at the Prometheus academy. Long after Zeus, ruler of the Greek gods of Mount Olympus, defeats the Titans and locks them deep in the bowels of the...
Read more on