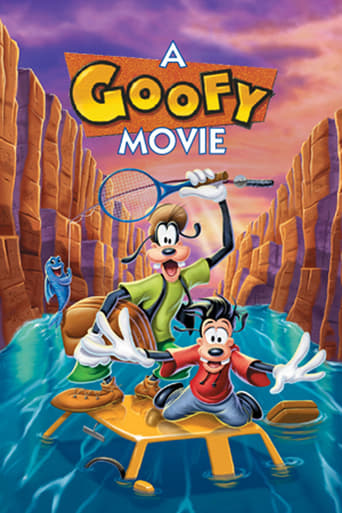 Rachel Marshall almost 3 years ago
One of the most underrated Disney films with the most awesome 90's soundtrack!

Lino Monteiro over 4 years ago
Fun and sweet, if not a little corny. Enjoyable songs and well-developed characters.

Michael Cole over 5 years ago
A fun family movie for both children and adults.

Justin L. Clemons almost 6 years ago
The road trip goes off track when Max wants to impress a girl. Stand Out, this movie does!

Jesse Smith over 7 years ago
More than the typical kiddie fare; this movie has a soul and a message.

Dylan Clites over 7 years ago
Who doesn't want to spend 90 minutes with Mickey's pal, Goofy? Seriously a fun time.

Jamie Leone Snow over 7 years ago
Classic Disney, every 90's kid remembers at least some of the song lyrics :)

Bethany Foster over 2 years ago
A Goofy Movie is a 1995 American animated musical film, produced by Walt Disney Feature Animation, Walt Disney Animation France S.A. and Walt Disney Animation Australia (later DisneyToon Studios), and released in theaters on April 7, 1995 by Walt Disney Pictures. The film features characters from The Disney Afternoon television series Goof Troop; the film itself acts as a sequel to the TV show. Directed by Kevin Lima, the film's plot revolves around the father-son relationship between Goofy and Max as Goofy believes that he's losing Max. A direct-to-video sequel, titled An Extremely Goofy Movie, was released in 2000. The film was dedicated to Pat Buttram. Max Goof is the son of Goofy, who has a tense relationship between them. On Max's last day of school, Max and his best friends Pete Junior and Bobby Zimmeruski hijack the auditorium stage in the middle of Principal Mazur's speech, creating a small concert where Max performs while costumed as the pop singer Powerline. The performance...
Read more on