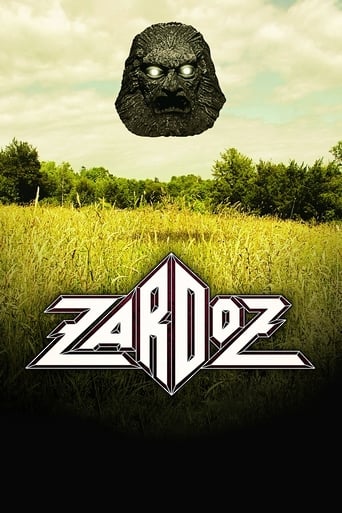 Noah Rymer almost 5 years ago
using Sean Connery's influence after "007" they made something truly weird... love it!

John Morgan over 6 years ago
Far from a perfect film, with pathetic FX, but packed with interesting ideas.

Taylor Reginald Wright 7 years ago
Sean Connery is impressive in this sci-fi film that often swings between art and schlock.

Scott Hume over 4 years ago

Randy Dumont over 5 years ago

Tracy Poff over 5 years ago

Fernando Studzinski over 5 years ago

Devon over 7 years ago

Cindy Featherbottom over 7 years ago

Charles Barker over 8 years ago

Tyler Mathews over 8 years ago
Zardoz is a 1974 science fiction/fantasy film written, produced, and directed by John Boorman. It stars Sean Connery, Charlotte Rampling, and Sara Kestelman. Zardoz was Connery's second post-James Bond role (after The Offence). The film was shot by cinematographer Geoffrey Unsworth on a budget of US$1 million. In the year AD 2293, a post-apocalyptic Earth is inhabited mostly by the Brutals, who are ruled by the Eternals. Eternals use other Brutals, called Exterminators, as the Chosen warrior class. The Exterminators worship the god Zardoz, a huge, flying, hollow stone head. Zardoz teaches: The Zardoz god head supplies the Exterminators with weapons, while the Exterminators supply it with grain. Zed (Sean Connery), an Exterminator, secrets himself within Zardoz for an initially unknown purpose. He shoots and apparently kills its pilot, Arthur Frayn (Niall Buggy), who has already identified himself as an Eternal in the story's prologue. The stone head containing Zed returns to the...
Read more on