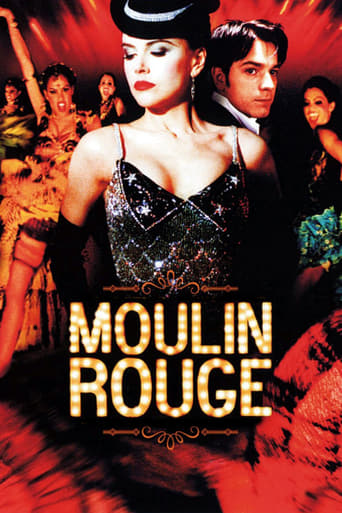 Danny B almost 3 years ago
It is a glorious, playful mess of a movie. So visually rich, you'll want to bathe in it.

Neil Cooke over 3 years ago
Actually better the second time round. Visually succulent. Enjoy with champagne!

samantha faulkner almost 6 years ago
This movie is quite possibly my favorite. Absolutely beautiful.

Ben Dauphinee almost 6 years ago
Fun, exciting, and it will make your heart hurt a little.

charlotte green over 6 years ago
The songs, man. The songs. Nicole Kidman as Satine was amazing

Jonathan Evans almost 7 years ago
Woo, party! I thought it was pretty clever.

Guillaume Bws Rolin almost 7 years ago
I keep the songs, you can have the rest.

Cori Sherow almost 7 years ago
The way they re-do well known songs is just amazing and the story line is fantastic too!

Alexandre Brisson 7 years ago
First musical movie that I can't complain about! A must see. I cried.

Andy Whitfield over 7 years ago
Still gets me every single time.

Jessika Acklin over 7 years ago
Best musical and love story ever! So sad but so amazing! They are perfect together <3

Lizzie over 7 years ago
Ewan McGregor does it again, ladies and gentlemen.

Rebecca Bateman over 7 years ago
Beautiful and fun. A favorite.

Denise Fleming over 7 years ago
A brilliant insta-favorite.

Adam Petramala almost 8 years ago
One of my favorites!

Dan Kearns almost 8 years ago
From original 10s list
Moulin Rouge! (English pronunciation: /muːˈlɑn ˈruːʒ/, from French: [mulɛ̃ ʁuʒ]) is a 2001 romantic jukebox musical film directed, produced, and co-written by Baz Luhrmann. Following the Red Curtain Cinema principles, the film is based on the Orphean myth, La Traviata, and La Bohème. It tells the story of a young, British poet/writer, Christian, who falls in love with the terminally-ill star of the Moulin Rouge, cabaret actress and courtesan Satine. It uses the musical setting of the Montmartre Quarter of Paris, France. At the 74th Academy Awards, the film was nominated for eight Oscars, including Best Picture and Best Actress for Nicole Kidman, winning two: for art direction and costume design. It was the first musical nominated for Best Picture in 22 years. It was filmed at Fox Studios in Sydney, Australia. In 1899, Christian moves to the Montmartre district of Paris to become a writer among the Bohemian culture. He encounters performers led by Toulouse-Lautrec; his writing skills...
Read more on