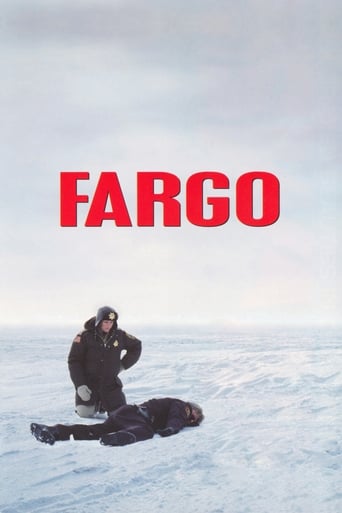 Matthew Bettencourt over 1 year ago
A masterclass in acting, writing, cinematography, and directing.

John Swallow over 3 years ago
Well told narrative and strong performances. Worth a watch if you've seen the TV shows.

Freddie Kay almost 4 years ago
"I don't think it deserves the praise it gets."

Jonathan Evans over 4 years ago
I understand why Walter always told Donny to shut up, as shown in a past life he didn't.

Leif Jacobson over 4 years ago
A fantastic film even relative to other Coen Brothers films.

Dominic Dirupo over 4 years ago
Superb. Everything in this is pitch perfect

Kam-Hung Soh over 5 years ago
Spare drama. A crime goes wrong. The world is only as good as we make it.

Tony Gandía over 5 years ago
Hilarious at parts, shocking in others, "Fargo" is a truly amazing crime caper.

Nile Calhoun over 5 years ago
It's cold, but the drama is still there.

Neil Cooke almost 6 years ago
Just brilliant. - Everything in balance. Watch this!

Anthony Lafferty 6 years ago
The Coen Brothers at their best with great performances from McDormand and Macy.
Fargo is a 1996 American dark comedy-crime film produced, directed and written by brothers Joel and Ethan Coen. It stars Frances McDormand as a pregnant police chief who investigates a series of homicides, William H. Macy as a car salesman who hires two criminals to kidnap his wife, Steve Buscemi and Peter Stormare as the criminals, and Harve Presnell as the salesman's father-in-law. The film earned seven Academy Award nominations, winning two for Best Original Screenplay for the Coens and Best Actress in a Leading Role for McDormand. It also won the BAFTA Award and the Award for Best Director for Joel Coen at the 1996 Cannes Film Festival. In 2006 it was deemed "culturally, historically, or aesthetically significant" and inducted into the United States National Film Registry. It is currently the most recently made feature length film in the Registry. In 1987, Minneapolis automobile salesman Jerry Lundegaard (Macy) is in severe financial trouble. After being introduced to criminals...
Read more on