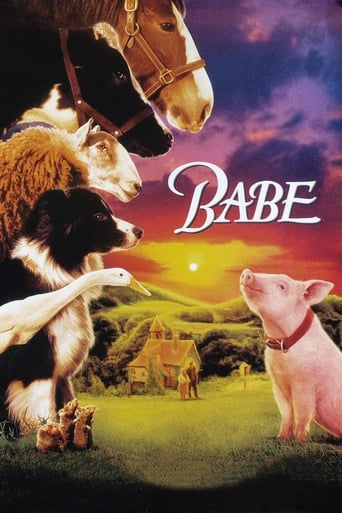 Amy Hendriks 12 months ago
That was a lot darker than I remember.

Justin L. Clemons 6 years ago
Adventures of a pig with a collar.

Kittypuff over 6 years ago
Loved this movie as a kid! Looking back at it, however, I realize that it's creepy af

Rohan Menzies almost 7 years ago
"A pig has no purpose". Not true. This is one incredible movie. Watch it NOW!!

Chelsea Foreman almost 7 years ago
Adorable kids movie. One of my favorites from childhood

Robyn Hamilton over 7 years ago
The greatest and one of the only good live action talking animal movies. So endearing

Dylan Clites almost 8 years ago
Babe is the best live action talking animal movie ever. A lot better than it looks.

nina um over 2 years ago
Babe is a 1995 Australian-American film directed by Chris Noonan. It is an adaptation of the 1983 novel The Sheep-Pig, also known as Babe: The Gallant Pig in the United States, by Dick King-Smith and tells the story of a pig who wants to be a sheepdog. The main animal characters are played by a combination of real and animatronic pigs and Border Collies. Babe was filmed in Robertson, New South Wales, Australia. The talking-animal visual effects were done by Rhythm & Hues Studios. Although the setting and style of the film are distinctly British/Australasian pastoral, many of the human speaking parts were overdubbed from Australian to American accents for popular acceptance in the American film market. The film was a critical and box office success and was nominated for seven Academy Awards including Best Picture, but lost to Braveheart. The success of the film launched a sequel, Babe: Pig in the City, which was released in 1998 to mixed reviews. After a piglet's mother is taken away...
Read more on