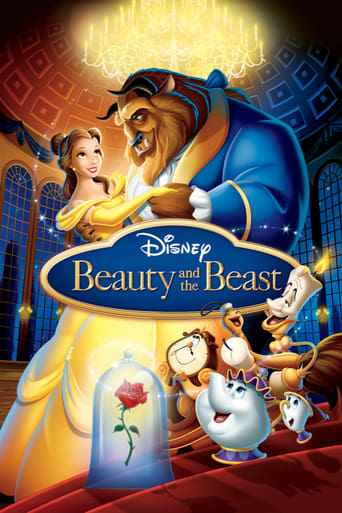 Jean Walton over 2 years ago
This classic has a villain problem-Gaston feels more cartoonish than the furniture.

Amanda Mathews over 3 years ago
Classic Disney. What more can I say?

Núrya Inocentes over 4 years ago
Tale as old as time, this movie is my childhood.

Leif Jacobson almost 5 years ago
A delightful and moving animated fairy tale, one of the best from the Disney Renaissance.

Johnny Nys 5 years ago
Girl who adores books falls in love with a ... not so attractive guy. My kind of movie ;)

Justin L. Clemons over 6 years ago
Good Disney animation. But she was kidnapped and she falls in love with him. Creepy.

Rohan Nowell 7 years ago
Love this as a kid. Guessing I wouldn't love it as much if I were to watch it today.

Hester 7 years ago
My alltime favorite!

Jane Kenney 7 years ago
Family friendly, and that beauty is not what is on the outside, but what lies within.

georgie over 7 years ago
i always wanted to be belle when i was younger. a great classic

Jade Dewyn almost 8 years ago
My other favourite Disney movie! And Gaston is one of the best Disney villains!
Beauty and the Beast is a 1991 American animated fantasy film produced by Walt Disney Animation Studios and distributed by Walt Disney Pictures. The thirtieth film in the Walt Disney Animated Classics series, the film is based on the fairy tale La Belle et la Bête by Jeanne-Marie Le Prince de Beaumont and uses some ideas from the 1946 film of the same name. The film centers around a prince who is transformed into a Beast and a young woman named Belle whom he imprisons in his castle. To become a prince again, the Beast must love Belle and win her love in return, or he will remain a Beast forever. The film's animation screenplay was written by Linda Woolverton with story written by Roger Allers, Brenda Chapman, Chris Sanders, Burny Mattinson, Kevin Harkey, Brian Pimental, Bruce Woodside, Joe Ranft, Tom Ellery, Kelly Ashbury, and Robert Lence, directed by Gary Trousdale and Kirk Wise, and produced by Don Hahn. The music of the film was composed by Alan Menken and Howard Ashman, both of...
Read more on