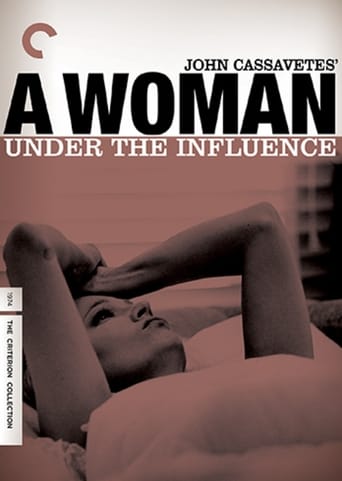 Aaron Jones almost 3 years ago
An incredible family-drama. Cassavetes is wowing me with every film of his I watch

emilio murillo over 5 years ago
Heartfelt story of "common people" and their everyday problems with mental stability.

Austin over 6 years ago
My favorite Cassavetes film, one of my favorite movies in general.

Tim Jules Hull over 7 years ago
A rare piece of film worth subjugating yourself to once as hard as it might be.

Jennifer Kaiser over 3 years ago

Gorilla Romero over 4 years ago

Matthew Bettencourt over 5 years ago

Roxana Parsa over 6 years ago

tamsin eggplanet over 7 years ago

René Margraff over 8 years ago
A Woman Under the Influence is a 1974 American drama film written and directed by John Cassavetes. It focuses on a woman whose psychotic behavior leads her husband to commit her for psychiatric treatment and the effect this has on their family. It received two Academy Award nominations for Best Actress and Best Director. In 1990, A Woman Under the Influence was selected for preservation in the United States National Film Registry as being "culturally, historically, or aesthetically significant", one of the first fifty films to be so honored. Los Angeles housewife and mother Mabel Longhetti loves her construction worker husband Nick and desperately wants to please him, but the strange mannerisms and increasingly odd behavior she displays while in the company of others has him concerned. Convinced she has become a threat to herself and others, he reluctantly commits her to an institution, where she undergoes treatment for six months. Left alone with his three children, Nick proves to be...
Read more on