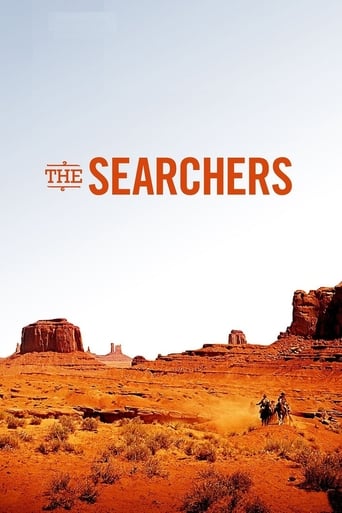 Jean Walton almost 2 years ago
Despite being on many top 10s, this film has flaws (racism and pacing) Wayne is great tho.

Danny B over 2 years ago
Oft-referenced "must watch" for film students, it's actually awful in 2017 terms.

Henry Ferguson 3 years ago
Often referred to as one of the greatest films of all time, and it's very easy to see why.

Miles Ross over 4 years ago
A less cliched western. A great revenge story with some nuanced morality. Beautiful enviro

Alexandra Sundarsingh almost 5 years ago
Beautiful scenery and a man on the hunt for revenge, or honour. Good Western.

Austin almost 6 years ago
One the saddest movies ever made, featuring my favorite Wayne performance.

Mike Faulkner over 6 years ago
One of the best westerns of all time.

Paul McCamley over 7 years ago
A very backwards and racist film but it is beautifully shot and well acted.

Saharah Bododah almost 8 years ago
Dislike the racist view on Indian tribes, but directing is excellent, and the scenery!!

john over 2 years ago

Rosalio Galvan over 3 years ago

Eirik Mistereggen over 4 years ago

Patrick Gaertner over 5 years ago

Nerd Girl over 5 years ago
The Searchers is a 1956 American Western film directed by John Ford, based on the 1954 novel by Alan Le May, and set during the Texas–Indian Wars. The picture stars John Wayne as a middle-aged Civil War veteran who spends years looking for his abducted niece (Natalie Wood), along with Jeffrey Hunter as his adoptive nephew, who accompanies him. The film was a commercial success, although it received no Academy Award nominations. It was named the Greatest American Western of all time by the American Film Institute in 2008, and it placed 12th on the American Film Institute's 2007 list of the Top 100 greatest movies of all time. In 1868, Ethan Edwards (Wayne) returns from the American Civil War, in which he fought for the Confederacy, to the home of his brother Aaron (Walter Coy) in the wilderness of northern Texas. Wrong-doing or legal trouble in Ethan's past is suggested by his three-year absence, a large quantity of gold coins in his possession, a Mexican revolutionary war medal that...
Read more on