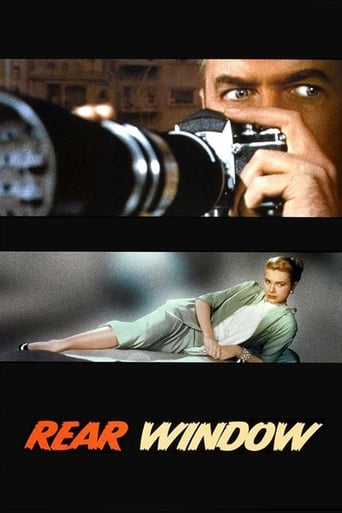 Jean Walton over 2 years ago
This is the best Hitchcock thriller. Quietly suspenseful-perhaps Graceful. :'D

Pamela Murray almost 3 years ago
One of the great old Hitchcock movies. And Grace Kelly's wardrobe is to die for.

Aaron Jones over 3 years ago
One of Hitchcock's best.

Noah Rymer over 4 years ago
expertly crafted film, everything works toward the finale.

Jonathan Evans over 4 years ago
Wow, I've never seen a set as intricate as that!

Dónal Kennedy 5 years ago
A masterclass in atmosphere and suspense, but it collapses under its own weight by the end

Robert Stuart over 5 years ago
James Stewart and Grace Kelly are great in this film. One of the best!

zorlack over 5 years ago
Hitchcock indulges our voyeurism at first. But it doesn't last long. A Masterpiece.

Austin over 5 years ago
One of Hitchcock's best...

Tony Gandía over 5 years ago
Paranoia and claustrophobia served up thrillingly by Hitchcock and Stewart.

brenda ludwig 6 years ago
Classic, masterpiece of suspense seasoned with just the right amount of humor!

Marcel almost 7 years ago
A masterpiece of suspense!!!

Mario Schievenini almost 7 years ago
Not much is needed to make an outstanding film. A masterpiece for me.

Lou 7 years ago
A Hitchcock Classic. Crime, suspense, danger. Plus the helplessness of Stewart. Gripping.

Fernando Olivas 7 years ago
Is he holding the camera wrong? I think he is... Why does it bother me so much?

Andrew Bruno over 7 years ago
Voyeurism, curiosity, crime, etc., it's Alfred Hitchcock and it's nearly perfect.
Rear Window is a 1954 American suspense film directed by Alfred Hitchcock, written by John Michael Hayes and based on Cornell Woolrich's 1942 short story "It Had to Be Murder". Originally released by Paramount Pictures, the film stars James Stewart, Grace Kelly, Wendell Corey, and Thelma Ritter. The film is considered by many filmgoers, critics and scholars to be one of Hitchcock's best. The film received four Academy Award nominations and was ranked #42 on AFI's 100 Years…100 Movies list and #48 on the 10th-anniversary edition. In 1997, Rear Window was added to the United States National Film Registry. After breaking his leg during a dangerous assignment, professional photographer L. B. "Jeff" Jeffries (James Stewart) is confined in his Greenwich Village apartment, using a wheelchair while he recuperates. His rear window looks out onto a small courtyard and several other apartments. During a summer heat wave, he passes the time by watching his neighbors, who keep their windows open...
Read more on