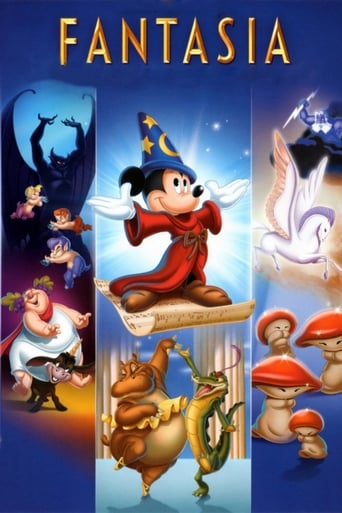 Jean Walton almost 2 years ago
The film is magnificent due to its imaginative spirit-and was the first to use stereo.

Noah Rymer 4 years ago
the best result of disney becoming such an animation powerhouse.

Lino Monteiro 5 years ago
Visually and musically enchanting and a technical masterpiece filled with wonder.

Rosalio Galvan over 5 years ago
classic

Kate Du-Rose almost 7 years ago
Amazing animation to amazing music. I will be watching this film forever

Robyn Hamilton 7 years ago
If I had to watch a movie on a loop forever, this would be it.

Kenneth Chisholm over 7 years ago
A bit uneven, but otherwise an astounding landmark of American animation.

Michael Cole over 7 years ago
While not being a terrible movie, I would suggest watching the much improved Fantasia 2000

Doc4art over 7 years ago
One of the best Disney has ever made.

Liam Price almost 2 years ago
Fantasia is a 1940 American animated film produced by Walt Disney and released by Walt Disney Productions. The third feature in the Walt Disney Animated Classics series, the film consists of eight animated segments set to pieces of classical music conducted by Leopold Stokowski, seven of which are performed by the Philadelphia Orchestra. Music critic and composer Deems Taylor introduces each segment in live-action interstitial scenes. Disney settled on the film's concept as work neared completion on The Sorcerer's Apprentice, an elaborate Silly Symphonies short designed as a comeback role for Mickey Mouse who had declined in popularity. As production costs grew higher than what it could earn, he decided to include the short in a feature-length film with other segments set to classical pieces. The soundtrack was recorded using multiple audio channels and reproduced with Fantasound, a pioneering sound reproduction system that made Fantasia the first commercial film shown in stereophonic...
Read more on