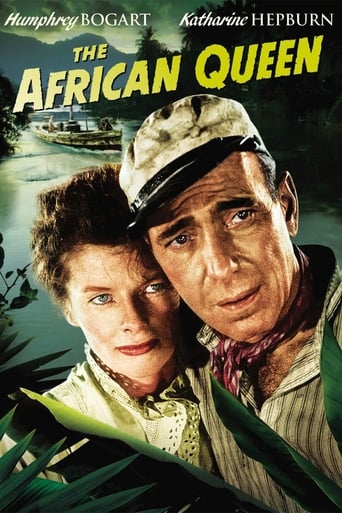 Jean Walton almost 2 years ago
Bringing up Baby meets The Guns of Navarone. But with leeches. 5/5

Davis Keck over 2 years ago
Surprisingly engaging and fun to watch, even to this day.

Aaron Jones over 2 years ago
Fun "Golden Age" drama/thriller. Nothing especially stands out, but it's an exciting ride.

Jonathan Evans over 6 years ago
Everyone was so polite back then. Still think Brando should have been best actor though.

Austin over 6 years ago
Though the directing is a little suspect, the script and stars make it a great romance.

Dominic Dirupo over 7 years ago
Shows that two stars can carry a movie on personality alone. Great watching

J How over 2 years ago

James over 2 years ago

N B almost 3 years ago

necl over 3 years ago

Mtt J over 3 years ago
The African Queen is a 1951 British adventure drama film adapted from the 1935 novel of the same name by C. S. Forester. The film was directed by John Huston and produced by Sam Spiegel and John Woolf. The screenplay was adapted by James Agee, John Huston, John Collier and Peter Viertel. It was photographed in Technicolor by Jack Cardiff and had a music score by Allan Gray. The film stars Humphrey Bogart (who won the Academy Award for Best Actor – his only Oscar), and Katharine Hepburn with Robert Morley, Peter Bull, Walter Gotell, Richard Marner and Theodore Bikel. The African Queen has been selected for preservation in the United States National Film Registry. Robert Morley and Katharine Hepburn play Samuel and Rose Sayer, brother and sister British Methodist missionaries in the village of Kungdu in German East Africa in 1914 during World War I. Their mail and supplies are delivered by the rough-and-ready Canadian boat captain Charlie Allnut (Humphrey Bogart) of the African Queen,...
Read more on