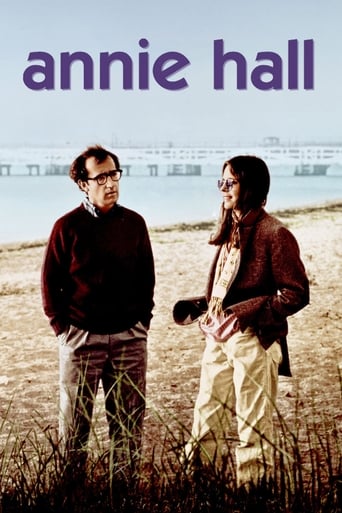 David Billnitzer almost 2 years ago
Hilarious but painfully familiar story of relationships. We've all been there.

Haydn Line over 3 years ago
a grower

Aaron Jones over 3 years ago
A really beautifully crafted film. Funny and sad.

Marcel over 6 years ago
Great movie. The story/dialogues are very clever and neurotic but a tad too pretentious

Ken Miguel-Cipriano 7 years ago
Really enjoyed it, the humor and the story.

Jacqui Hocking over 7 years ago
He can do no wrong. Love.

Austin over 7 years ago
I love this film. It gives me hope, spreading a smile across my face even after a bad day.

Sebastian Villegas over 7 years ago
Sincere, funny and well acted. There's a reason it's a classic.

Natasha Marchev over 7 years ago
LOL!

sf almost 8 years ago
Ranks up there with The Marx Brothers. Almost Sublime

Daniel Jones 8 years ago
Woody Allen's genius is displayed best in Annie Hall.
Annie Hall is a 1977 American romantic comedy directed by Woody Allen from a screenplay co-written with Marshall Brickman and co-starring Diane Keaton. One of Allen's most popular and most honored films, it won four Academy Awards including Best Picture. Roger Ebert described it as "just about everyone's favorite Woody Allen movie". Allen had previously been known as a maker of zany comedies; the director has described Annie Hall as "a major turning point", as it brought a new level of seriousness to his work. The film is set in New York City, Chippewa Falls, WI, and Los Angeles. Alvy Singer (Woody Allen) is a neurotic comedian, attempting to maintain a relationship with the seemingly ditzy but exuberant Annie (Diane Keaton). The film chronicles their relationship over several years, intercut with various imaginary trips into each other's history (Annie is able to "see" Alvy's family when he was only a child, and likewise Alvy observes Annie's past relationships). In the first...
Read more on