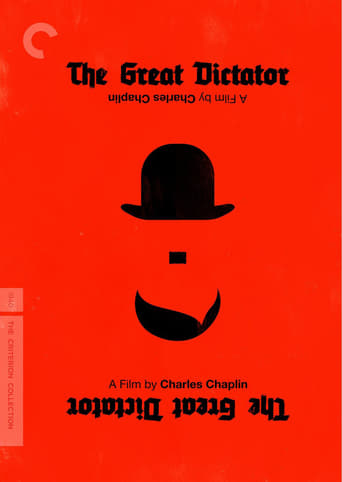 Noah Rymer over 4 years ago
Not chaplain's best, but his most political.

Ryan Boucher almost 6 years ago
In dire of need of editing. Disappointingly boring.

Anders Klingsheim 6 years ago
A great classic. Well done for its time

Jim Barton 6 years ago
In my opinion his best movie. If you haven't seen any Chaplin start with this one.

Austin almost 7 years ago
Charlie Chaplin is the best.

Nick Steeves over 7 years ago
Hilarious, but the speech at the end is guaranteed to knock your socks off. Powerful.

Anthony Kozlowski over 7 years ago
Contains what is possibly the single greatest monologue in cinema history.

Dylan Clites over 7 years ago
Like SNL... 35 years before SNL. And a finishing speech that is still relevant today.

Mennah Ahmed Maher over 2 years ago

Cameron Chamberlain over 4 years ago
The Great Dictator is a comedy film by Charlie Chaplin released in October 1940. Like most Chaplin films, he wrote, produced, and directed, in addition to starring as the lead. Having been the only Hollywood film maker to continue to make silent films well into the period of sound films, this was Chaplin's first true talking picture as well as his most commercially successful film. More importantly, it was the first major feature film of its period to bitterly satirize Nazism and Adolf Hitler. At the time of its first release, the United States was still formally at peace with Nazi Germany. Chaplin's film advanced a stirring, controversial condemnation of Hitler, fascism, antisemitism, and the Nazis, whom he excoriates in the film as "machine men, with machine minds and machine hearts". The film begins during a battle of World War I. The protagonist is an unnamed Jewish private (Charlie Chaplin), a barber by profession, and is fighting for the Central Powers in the army of the...
Read more on