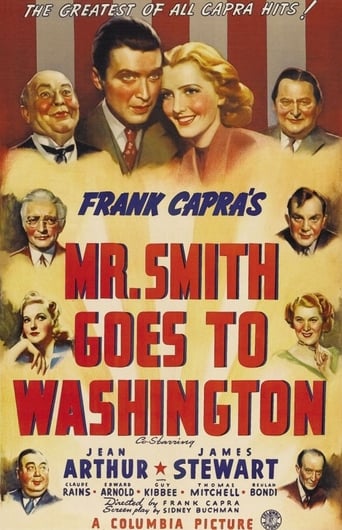 - +
Rate this film
Add a review
Delete Rating/Review Share Add to queue
In your queue
Remove it
Mr. Smith Goes to Washington 1939

Michael Cole 6 years ago
Stands the test of time for a good political corruption story.

Anthony Kozlowski 8 years ago
So idealogical it's almost sickening, but that's Frank Capra for you.

Margarita Krivega over 3 years ago

John-Mark Mills over 3 years ago

Rose B almost 6 years ago

Caleb Alan Kestner 6 years ago
Mr. Smith Goes to Washington is a 1939 American drama film starring Jean Arthur and James Stewart about one man's effect on American politics. It was directed by Frank Capra and written by Sidney Buchman, based on Lewis R. Foster's unpublished story. Mr. Smith Goes to Washington was controversial when it was released, but also successful at the box office, and made Stewart a major movie star. The film features a bevy of well-known supporting actors, among them Claude Rains, Edward Arnold, Guy Kibbee, Thomas Mitchell and Beulah Bondi. Mr. Smith Goes to Washington was nominated for 11 Academy Awards, winning for Best Original Story. In 1989, the Library of Congress added the movie to the United States National Film Registry, for being "culturally, historically, or aesthetically significant." The governor of an unnamed western state, Hubert "Happy" Hopper (Guy Kibbee), has to pick a replacement for recently deceased U.S. Senator Sam Foley. His corrupt political boss, Jim Taylor (Edward...
Read more on