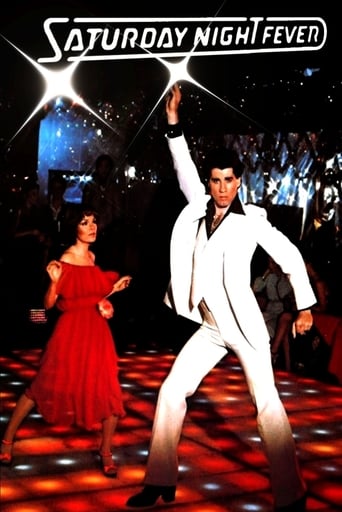 Kam-Hung Soh over 4 years ago
Crossing the boundary into manhood, one disco song at a time.

Robyn Hamilton almost 8 years ago
The movie that invented disco dancing-or so my mum tells me. BEST.SOUNDTRACK.EVER!

Rachel Marshall over 3 years ago

Angela Ka over 5 years ago
Saturday Night Fever is a 1977 drama film directed by John Badham and starring: John Travolta as Tony Manero, an immature young man whose weekends are spent visiting a local Brooklyn discothèque; Karen Lynn Gorney as his dance partner and eventual friend; and Donna Pescow as Tony's former dance partner and would-be girlfriend. While in the disco, Tony is the king. His care-free youth and weekend dancing help him to temporarily forget the reality of his life: a dead end job, clashes with his unsupportive and squabbling parents, racial tensions in the local community, and his associations with a gang of macho friends. A huge commercial success, the film significantly helped to popularize disco music around the world and made Travolta, already well known from his role on TV's Welcome Back, Kotter, a household name. The Saturday Night Fever soundtrack, featuring disco songs by the Bee Gees, is the best selling soundtrack of all time. The film is the first example of cross-media marketing,...
Read more on