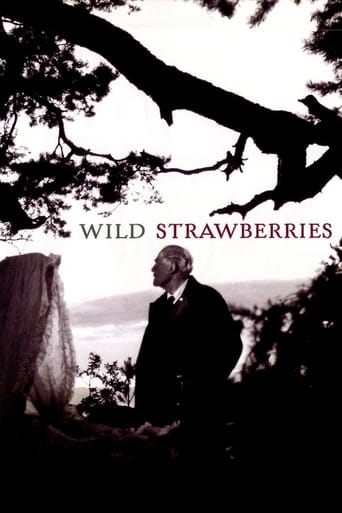 Ferşat Özçelik over 6 years ago
of course a cult film by bergman.

Mario Schievenini over 6 years ago
A marvel of the seventh art. Bergman captivates fellings amazingly. Love the oniric set.

Austin over 6 years ago
I'm at a loss trying to describe it. It's amazing, life changing, and fills me with love.

Concetta Odierno over 6 years ago
masterpiece.

Cooper Styles 7 years ago
Remember being forced to watch this in university but ended up loving it.

Fernando Olivas over 7 years ago
You start to grow older when you first realize the little control you have over your life.

Daniel Jones over 7 years ago
Beautiful.

Annalisa Schettino over 3 years ago

Ryan over 4 years ago

august over 4 years ago
Wild Strawberries is a 1957 Swedish film written and directed by Ingmar Bergman, about an old man recalling his past. The original Swedish title is Smultronstället, which literally means "the wild strawberry patch", but idiomatically means an underrated gem of a place (often with personal or sentimental value). The cast includes Victor Sjöström in his final screen performance, as well as Bergman regulars Bibi Andersson, Ingrid Thulin and Gunnar Björnstrand. Max von Sydow also appears in a small role. Bergman wrote the screenplay while hospitalized. Because it tackles difficult questions about life, and thought-provoking themes such as self-discovery and human existence, the film is often considered to be one of Bergman's most emotional, optimistic and best films. Grouchy, stubborn, and egotistical Professor Isak Borg, a 78 year old widower, is an elderly physician. His medical and scientific specialty was bacteriology. Before specializing he served as general practitioner in rural...
Read more on