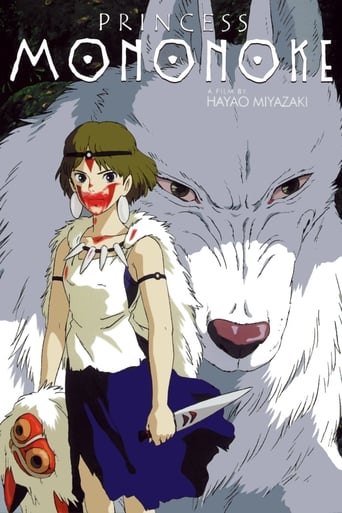 Charlie Alcock almost 3 years ago
Uggghhhh so good. This godforsaken Earth is not worthy of Hayao Miyazaki.

Mahri Skulls 3 years ago
Wonderful anime on how mankind destroys every living thing - even itself.

Amanda Mathews over 3 years ago
OMG. This movie. Amazing.

nope 4 years ago
great movie with both visuality and story

Sophie Alvelda over 4 years ago
A little confusing in the beginning, but once you get it, it's mind blowingly beautiful.

Jonathan Evans over 5 years ago
This imagination is unlike any I've seen. Breathtaking apart from the ending.

Gabi Dincă over 5 years ago
One of my favorite movies from Studio Ghibli.

Dyah Agustine over 5 years ago
The story just gives me another reason to hate human race.

Leif Jacobson over 5 years ago
An excellent film, one that doesn't cop out or shy away from difficult questions.

Rachael MacLean over 6 years ago
What Miyazaki has to say about East/West, Past/Present, and the Environment is amazing.

Annika Løchte Taylor over 6 years ago
Good and beautifully drawn, but not the most memorable Miyazaki movie to me.

Peter Zockoll over 6 years ago
Watch it right now.

Fernando Dunn II over 6 years ago
Great animation, story telling and action sequences. One my favorite from Miyazaki.

Nicholas Moore over 6 years ago
I saw this in the theater when it came out. I've been a huge Miyazaki fan ever since.
Princess Mononoke (もののけ姫, Mononoke-hime) is a 1997 epic Japanese animated historical fantasy feature film written and directed by Hayao Miyazaki of Studio Ghibli. "Mononoke" (物の怪) is not a name, but a general term in the Japanese language for a spirit or monster. The film was first released in Japan on July 12, 1997, and in the United States on October 29, 1999. Princess Mononoke is a period drama set specifically in the late Muromachi period of Japan but with numerous fantastical elements. The story concentrates on involvement of the outsider Ashitaka in the struggle between the supernatural guardians of a forest and the humans of the Iron Town who consume its resources. There can be no clear victory, and the hope is that relationship between humans and nature can be cyclical. Roger Ebert placed the movie sixth on his top ten movies of 1999. Mononoke also became the highest grossing movie in Japan until Titanic took over the spot several months later. A giant boar-demon attacks an...
Read more on