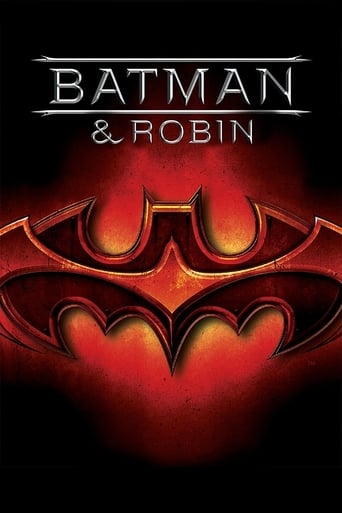 Noah Rymer 4 years ago
the first and only film that I ever wanted to walk out of.

Tony Gandía over 5 years ago
Nauseating. Not one thing worked. Everyone is miscast, doesn't even qualify as campy fun.

Kirk Bailey 6 years ago
Child hood reasons. This film was my first action film and it's what got me into Batman.

Adam Connell over 6 years ago
It's like they were trying to make as awful a film as possible; and everyone was in on it.

Jesse Arnold almost 7 years ago
You can feel your IQ drop as you watch this trash.

Tiziana Ibba almost 7 years ago
The worst in this saga. From screenplay to actors, it's full of wrong choices(&bad jokes).

Derick Leach 7 years ago
Worst adaptation of the caped crusader...ever!

Evan Light 7 years ago
Never in history has so much money been spent to generate such a powerful vacuum.

Taylor Reginald Wright 7 years ago
It seems studio meddling is to blame for this self-parody, but it's entertaining to boot.

Kenneth Chisholm over 7 years ago
A pathetic flop that at least discredited campiness in the superhero genre.

Ben Calverley over 7 years ago
Absolutely dire, miscast mess. Fails in its attempts to recapture the 60s campness.

Mohamed Saher over 7 years ago
Never..Ever..Watch it
Batman & Robin is a 1997 American superhero film directed by Joel Schumacher. Based on the DC Comics character Batman, the film is a sequel to Batman Forever (1995), with George Clooney replacing Val Kilmer as Batman. Batman & Robin also stars Arnold Schwarzenegger, Uma Thurman, Chris O'Donnell, Alicia Silverstone, and Michael Gough. The film tells the story of Batman and Robin struggling to keep their partnership together while trying to stop Mr. Freeze, Poison Ivy and Bane from covering Gotham City with ice and vegetation. Development for Batman & Robin started immediately after Batman Forever, and Warner Bros. commissioned the film for an adamant June 1997 release. Principal photography began in September 1996 and finished in January 1997, two weeks ahead of the shooting schedule. Batman & Robin was released on June 20, 1997, and was critically panned. Observers criticized the film for its toyetic and camp approach, as well as possible homosexual innuendo added by Schumacher....
Read more on