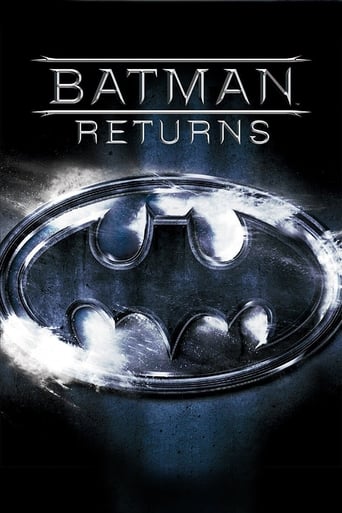 Denise Elwyn McKenzie 2 months ago
Should have been called 'Catwoman'.

Paul Lanoue 4 years ago
Cobblepot. one of my top 5 villains in cinema

Guy Meltzer over 4 years ago
once again - Batman, me. I'm Batman.

Ashleigh Louise Klaassen almost 5 years ago
Batman barely appeared in this one. Catwoman was stellar though.

Tony Gandía over 5 years ago
Appropriately dark and moody, BR gives us an excellent Pfeiffer but an unsubtle DeVito

Ay Lin almost 6 years ago
As for Burton expected, bittersweet & a dark atmosphere, plus the true-and-only Catwoman.

Nadja Bester almost 6 years ago
This should've been named after Catwoman...or Mr. Penguin - Batman was the weakest link.

JustinMFnTime over 6 years ago
Worst Batman movie ever. Enjoyable but very unBatman. The ball was dropped for this movie

Michael Cole over 6 years ago
Feels even more Burton-esque than the first film, for better or worse

Tiziana Ibba 7 years ago
The best of this Bat-saga, imo. And M.P. is a perfect Catwoman for this atmosphere.

Taylor Reginald Wright over 7 years ago
Busy, morbid and it ends on a sour note, but it doesn't ruin this wildly inventive movie.

Dylan Clites over 7 years ago
A little over the top like most Burton movies, but still a good Batman film.

Brian Kuepper 1 year ago
Batman Returns is a 1992 American superhero film directed by Tim Burton. Based on the DC Comics character Batman, it is the sequel to Burton's Batman (1989), and features Michael Keaton reprising the title role, with Danny DeVito as the Penguin and Michelle Pfeiffer as Catwoman. Burton originally did not want to direct a sequel because of his mixed emotions toward the previous film. Daniel Waters delivered a script that satisfied Burton; Wesley Strick did an uncredited rewrite, deleting the character of Robin and rewriting the climax. Filming started at Burbank, California in June 1991. Batman Returns was released to financial and critical success, though it caused some controversy for being darker than its predecessor. A deformed baby boy is thrown into Gotham City's river by his horrified parents. Thirty-three years later, the child, Oswald Cobblepot, resurfaces as the hideous Penguin (Danny DeVito), who blackmails millionaire Max Shreck (Christopher Walken) with evidence of his...
Read more on