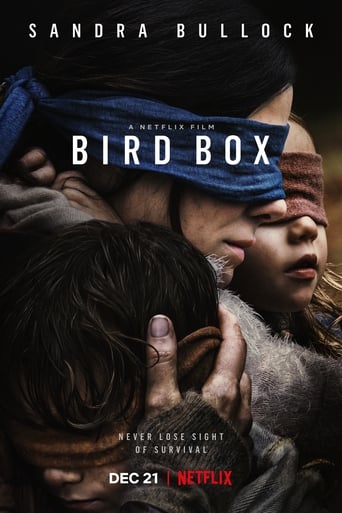 Ryan Boucher 12 months ago
Parenting. It's a hoot.

Tony Gandía over 1 year ago
Cool premise, Bullock is good; but the film's plot just meanders

Eric Brainard almost 2 years ago
It is a suspenseful watch, once. Sure, I could watch it again but won't gain anything new.

Dónal Kennedy 2 years ago
Bullock is arresting in this genuinely unsettling creature feature.

Grace 2 years ago
MC was a little hard to sympathize with. Wish the monsters could've been dealt with more.

Miranda Wright 2 years ago
A "horror" film that doesn't rely on cheap jump scares, but rather an actual story

Luke Duncan 2 years ago
One of the best apocalyptic films out there.

Fabio Augusto Vanegas Bovea 2 years ago
Film in which extraterrestrials cause people to commit suicide through vision.

janvanham 2 years ago
Rather boring and way too many coincidences!

Beatrice Bezzon over 1 year ago

Kosala Liyanage over 1 year ago

Humberto Octavio over 1 year ago

Saška Svirac over 1 year ago
A woman and a pair of children are blindfolded and make their way through a post-apocalyptic setting along a river.
×
Facebook Twitter