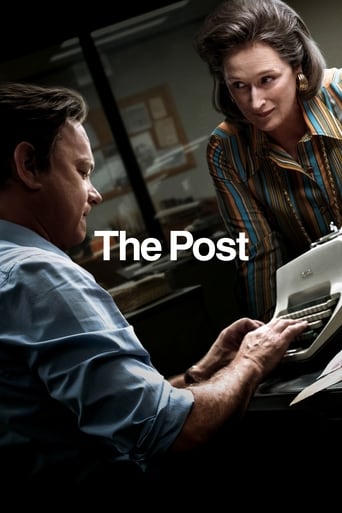 Mary Elise Murphy almost 2 years ago
Loved it! Would recommend without hesitation.

Tony Gandía almost 2 years ago
Doesn't disappoint in the telling of an important piece of journalistic history.

Dónal Kennedy almost 2 years ago
A stirring and well-cast, if quite conventional, historical drama. Comfy cinema.

Michael Cole almost 2 years ago
Freedom of the press!

Danny B 2 years ago
Important history played well. Streep & Hanks show why they're big stars. They earned it.

Daniel Lanciana 2 years ago
Comes together nicely at the end.

Lowfill Tarmak over 1 year ago

Ben Dauphinee over 1 year ago

Sandra over 1 year ago

Aude Portales over 1 year ago

Jenna Rose Robbins over 1 year ago

Abigail Keller over 1 year ago
A cover-up that spanned four U.S. Presidents pushed the country's first female newspaper publisher and a hard-driving editor to join an unprecedented battle between journalist and government. Inspired by true events.
×
Facebook Twitter