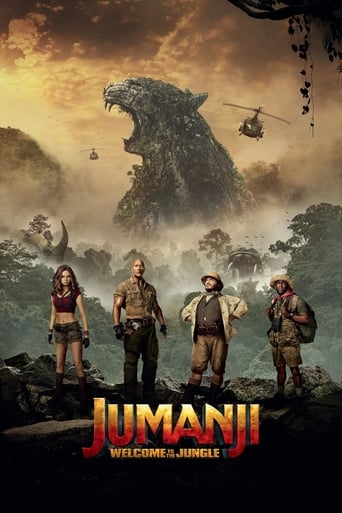 23
94
17
Rate this film
Add a review
Delete Rating/Review Share Add to queue
In your queue
Remove it
Jumanji: Welcome to the Jungle 2017

Ashleigh Louise Klaassen almost 2 years ago
It's not even in the same league as the original but it's very watchable.

Brandon Keck almost 2 years ago
Better than the original.? Balances nostalgia and new to make it a close call.

Aaron Jones almost 2 years ago
Rock Bottom expectations, actually decent/watchable. Would go for sequels if they do that.

Fabio Vanegas almost 2 years ago
I love this movie. Excellent performance of Black Jack and the Rock

Fabio Augusto Vanegas Bovea almost 2 years ago
I love this movie. Excellent performance of Black Jack and the Rock

Luciana Ducceschi almost 2 years ago
It was decent enough but really just makes me want to watch the original again.

Kelly Tyrion Robson almost 2 years ago
I really enjoyed it, some very amusing scenes. Loved Jack Blacks acting in this.

Sydney Stene 2 years ago
Nothing demanding, but really fun! And THANK YOU FOR DESTROYING THE GAME AT THE END!

Ćetković Danilo 2 years ago
Fun movie to watch. Don't expect too much and you will not be disappointed.

「M I G U E L」 2 years ago
Bad writing coupled with an okay end. Surprisingly good if your expectations are very low

Michelle Greco 2 years ago
This was a fun movie! I laughed quite a bit. It's fun for a night in.

Miranda Wright 2 years ago
better than i thought...

Ben B 2 years ago
Superstar cast did a great job. Hilarious movie and yet still had a good plot.

Moira Sings 2 years ago
Better than I thought it would be but relied a little too heavily on sexist tropes.

Amanda Mathews 2 years ago
Gillan and Johnson made me want to watch it. It was way better than I expected. LOVE.

Tiziana Ibba 11 months ago
The tables are turned as four teenagers are sucked into Jumanji's world - pitted against rhinos, black mambas and an endless variety of jungle traps and puzzles. To survive, they'll play as characters from the game.
×
Facebook Twitter