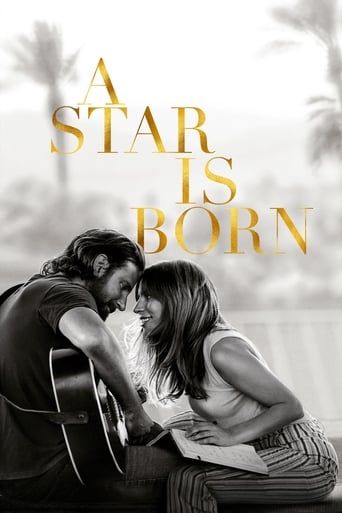 Anja Waber 4 months ago
such a lovely but sad movie

Jessica Birnie 6 months ago
A star is born is brilliantly acted and written and the songs are fantastic and memorable.

Freya 9 months ago
Great movie and better than expected.

Marina Đukanović over 1 year ago
Every second of this film is a cliché. The most overrated film of the year, if not decade.

Andy Whitfield over 1 year ago
Gaga is surprisingly good in this tearjerker - might be hard to watch more than once.

Tony Gandía over 1 year ago
Definitely impressively done. All quite good, but none of it quite surprising.

Dzenan Suljevic almost 2 years ago
Amazing performance by Cooper and some great music packed in an interesting love story.

Matthew Bettencourt almost 2 years ago
Scenes go on way too long. Did not engage or connect me at all. Overrated.

Ester almost 2 years ago
It's the same old story, but it still managed to make me emotional.

Ashleigh Louise Klaassen almost 2 years ago
I didn't think a version could top the original but this blew all previous versions away.

Aaron Jones almost 2 years ago
Really wonderful moments of pure cinema. Coop' might actually have the stuff of directing.

Dónal Kennedy 2 years ago
Gaga dazzles & the craft is strong but Cooper is an irredeemable arse.

Natalie 2 years ago
the soundtrack made this

sssjoaquim 27 days ago
Seasoned musician Jackson Maine discovers—and falls in love with—struggling artist Ally. She has just about given up on her dream to make it big as a singer—until Jack coaxes her into the spotlight. But even as Ally's career takes off, the personal side of their relationship is breaking down, as Jack fights an ongoing battle with his own internal demons.
×
Facebook Twitter