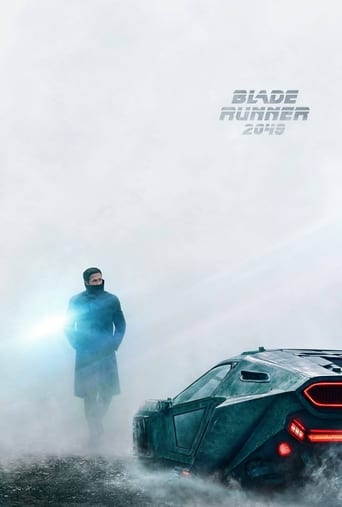 Michael Cole almost 2 years ago
Started out strong, but dragged on and needed about 30-40 minutes trimmed out

pessimist almost 3 years ago
I hope they paid Deakins more than Villeneuve for this one.

Bruno Ferreira Machado almost 3 years ago
Absolutely phenomenal. The cinematography is breathtaking. One of the best movies of 2017.

janvanham almost 3 years ago
The best sequel of all time.

June Patnaree almost 3 years ago
so many emotions on this film, love it so mcuh

Sydney Stene 3 years ago
Awesome sequel that looks absolutely fantastic and totally cashes in on its atmosphere.

Ryan Boucher 3 years ago
BRAAAAAAAAP. Great atmosphere, I long for more content in this setting. BRAAAAAAAP

Noah Rymer 3 years ago
cool visuals, the best parts had nothing to do with the original.

Tony Gandía over 3 years ago
Successful sequel that is visually gorgeous and satisfyingly ambitious.

Dónal Kennedy over 3 years ago
Dazzling, difficult cinema with a minimum of handholding. Great sequel

Andy Whitfield over 3 years ago
Like the original, both a visual masterpiece and a piece on what makes us human.

Charlie Alcock over 3 years ago
I liked it, even though it suffers from Let's Hyper-Emulate The Tone Of A Unique Film-itis

Jenny Forsyth 5 months ago
Thirty years after the events of the first film, a new blade runner, LAPD Officer K, unearths a long-buried secret that has the potential to plunge what's left of society into chaos. K's discovery leads him on a quest to find Rick Deckard, a former LAPD blade runner who has been missing for 30 years.
×
Facebook Twitter