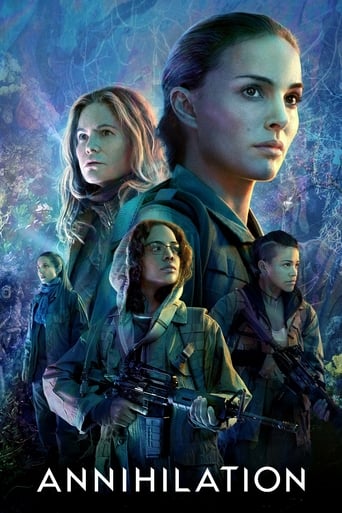 Tony Gandía 11 months ago
Bizarre and challenging; tries too hard to be super cerebral sacrificing coherency

Kosala Liyanage 1 year ago
Awesome! But too hard to rewatch

Alexandra Sundarsingh 1 year ago
Visually beautiful and a haunting storyline. Very different from the book.

Eric Brainard over 1 year ago
Beautifully terrifying science fiction. Intelligence required to fully get the terror.

Danny B over 1 year ago
Anticipated horror/action, got a thinker instead. Solid actual sci-fi. Watch it once.

Kayley Sage over 1 year ago
Old school, hard sci-fi, that doesn't dumb itslef down "for the audience". Love it!

Robyn Hamilton almost 2 years ago
A chilling, stand-out final act but as a whole, Annihilation fails to cut a deep mark.

Charlie Alcock almost 2 years ago
Beautifully designed, and the final sequence is stunning, but overall it feels lacklustre.

tal sheldon almost 2 years ago
The idea of the plot is pretty cool, but the execution was terrible.

Noah Rymer almost 2 years ago
this is usually my fav genre, but this was just a bad "black mirror" episode

Aaron Jones 2 years ago
The climax really felt like an iconic moment for sci-fi/horror of the 2010s. Dig the VFX.

Quang tran 2 months ago
A biologist signs up for a dangerous, secret expedition into a mysterious zone where the laws of nature don't apply.
×
Facebook Twitter