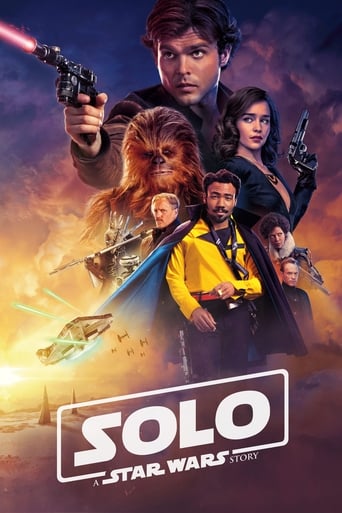 - +
Rate this film
Add a review
Delete Rating/Review Share Add to queue
In your queue
Remove it
Solo: A Star Wars Story 2018

Randi Steers 8 months ago
Pleasantly surprised by this film. Still feel Ehrenreich was the wrong choice for Han.

Kosala Liyanage almost 2 years ago
Ugly Han Solo and Dark haired Danny. No one asked for this.

Luke Duncan over 2 years ago
Ehrenreich and Glover acted so accurately as Han and Lando. Best Star Wars film in a while

Dzenan Suljevic over 2 years ago
Better than expected. Especially when compared to Rogue One.

Charlie Alcock over 2 years ago
Surprisingly very enjoyable. Easily the best of the new Star Wars crop after TLJ.

Daniel Lanciana over 2 years ago
Kid's film, no strong characters.

Sydney Stene over 2 years ago
Fun story. Doesn't necessarily add much to the franchise, but an entertaining ride.

Andy Whitfield over 2 years ago
Hits all the predictable beats - worth it for Donald Glover's Lando.

Aaron Jones over 2 years ago
I like the supporting characters, but it's a little predictable. Good start to a trilogy.

Tony Gandía over 2 years ago
Fast paced, not surprising and a bit unconvincing