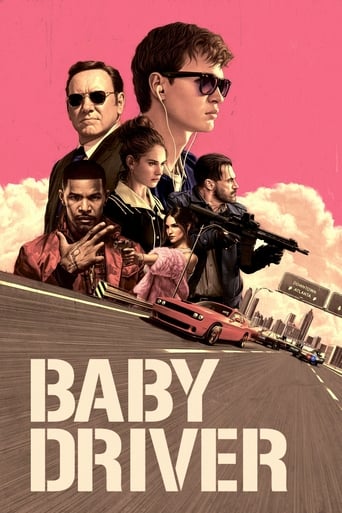 Alex Silver 10 months ago
Good, but best for teens rather than adults.

Denise Elwyn McKenzie over 1 year ago
The driving was amazing, the music was cool, but the movie was shit.

Freya over 1 year ago
Loved the 2 lovebirds and the aesthetics!

Sydney Stene over 1 year ago
Had lag in story/character, admittedly, but that wicked sound design alone made up for it.

Jared Dantis over 1 year ago
Cool action scenes, great soundtrack, but the characters came across a bit shallow.

Ryan Boucher over 2 years ago
Entertaining.

Brandon Keck almost 3 years ago
Packaged so tightly that it feels like it should be great, but they forgot to add heart.

Daniel Jones almost 3 years ago
Average movie with soundtrack and editing. Not Wright's best by a long shot.

Aaron Jones 3 years ago
Awesome action scenes, use of sound (mickey-mousing) but the characters are pretty static.

Noah Rymer 3 years ago
on a technical level its some of the best directing ever, weak story and characters though

Michael Cole 3 years ago
Among the best car chases I've seen, but all the characters could have used more depth

pessimist 3 years ago
Guess the director really wanted to do a car chase movie.

nicole 3 years ago
This missed a few things in delivery, but it's so endearing

Bruno Ferreira Machado over 3 years ago
I had high expectations and they were surpassed. Fantastic movie by a fantastic director.

Davis Keck over 3 years ago
I had too high expectations; Hot Fuzz was better. Hollow characters. Music was okay.

Juan Miguel over 3 years ago
Good and dynamic movie! The soundtrack it's great!

Grace over 3 years ago
Cool concept and acting is good. Plot and character development is weak though.

Dzenan Suljevic over 3 years ago
Baby Driver lives and breathes music like no other film has ever done. Love it!

Charlie Alcock over 3 years ago
It's just really great. I don't know what else to say about it.
After being coerced into working for a crime boss, a young getaway driver finds himself taking part in a heist doomed to fail.
×
Facebook Twitter