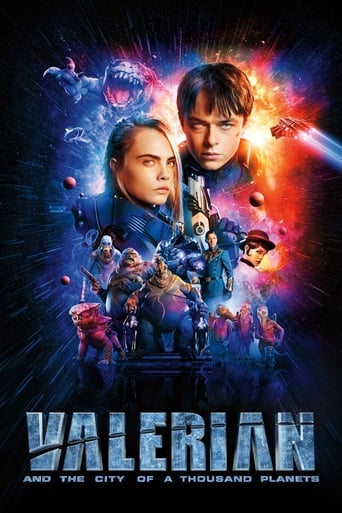 Nick over 1 year ago
DeHaan's acting ruined the movie for me. Rihanna's strip tease gets 5 stars.

Brandon Keck almost 2 years ago
Somewhere in this giant mess Besson had a cool concept. But, it got lost in his ambition.

Grace almost 2 years ago
Tried hard to be profound. Overall struck a tone of eh when you take a step back to look.

Robyn Hamilton almost 2 years ago
Great CGI, abysmal storytelling. DeHaan has as much charisma and appeal as a rusty spoon.

Bruno Ferreira Machado 2 years ago
What a trainwreck. Such awful acting. Such a bad plot and pacing. Much worse than I hoped.

Daniel Jones 2 years ago
Story is thin, but action is good. Fun to watch with great effects and cgi.

Sinead Shahrzad over 2 years ago
The creatures and the universe are A++. The acting and main characters however are F--.

Branden M over 1 year ago

Maxime Desroches Gauthier over 1 year ago

Mark Bezerman over 1 year ago
In the 28th century, Valerian and Laureline are special operatives charged with keeping order throughout the human territories. On assignment from the Minister of Defense, the two undertake a mission to Alpha, an ever-expanding metropolis where species from across the universe have converged over centuries to share knowledge, intelligence, and cultures. At the center of Alpha is a mysterious dark force which threatens the peaceful existence of the City of a Thousand Planets, and Valerian and Laureline must race to identify the menace and safeguard not just Alpha, but the future of the universe.
Read more on