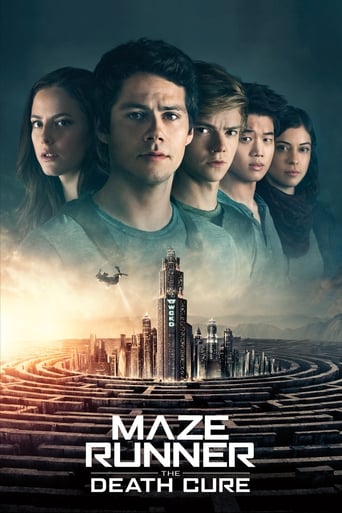 17
33
4
Rate this film
Add a review
Delete Rating/Review Share Add to queue
In your queue
Remove it
Maze Runner: The Death Cure 2018

Kayley Sage almost 3 years ago
Better than I thought. Can't judge as an adaptation, but it's a good film on it's own.

Michael Cole 3 years ago
Better than the second film

Luciana Ducceschi 3 years ago
Great action, directing, and acting. However, it's not a story made for the silver screen.

Quang tran over 1 year ago

Fernando Olivas over 1 year ago

Flo HM over 2 years ago

Diogo Almeida almost 3 years ago
Thomas leads his group of escaped Gladers on their final and most dangerous mission yet. To save their friends, they must break into the legendary Last City, a WCKD-controlled labyrinth that may turn out to be the deadliest maze of all. Anyone who makes it out alive will get answers to the questions the Gladers have been asking since they first arrived in the maze.
Read more on