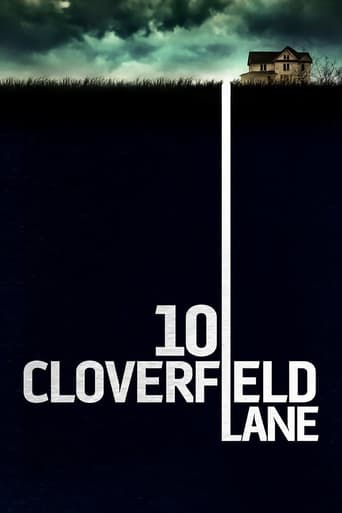 Davis Keck over 2 years ago
Solid fun, but nothing outstanding. Protagonist acting intelligently is the best part.

Robyn Hamilton 3 years ago
Terrifically tense thriller that spins into pulpy B movie territory at the end. Good watch

nicole over 3 years ago
I want to scrub my brain. It just tried too hard...

Phetcharat over 3 years ago
Predictable.

Alejandro Betancourt over 3 years ago
If you wake up in a bunker and the only story you have is your guard, what would you do?

Damian Campo over 3 years ago
Not a Cloverfield squeal. It's about a paranoic guy with a bunker to encase/protect others

Kittypuff almost 4 years ago
If ur looking 4 a Cloverfield sequel (like me), ur outta luck. but its a good movie,8/10!

Dzenan Suljevic almost 4 years ago
Unusual story that will keep you guessing. Great atmosphere and performances.

Lenart Skoberne 4 years ago
Tense psychological thriller, featuring one of the best female heroine since Alien.

Grace 4 years ago
It tried to combine two types of movies and should've stuck with one. Good suspense tho.

Andy 4 years ago
Maybe I didn't "get it", but this was just "blah" with "blah ending", like the original.

cervv 4 years ago
:/
Waking up from a car accident, a young woman finds herself in the basement of a man who says he's saved her life from a chemical attack that has left the outside uninhabitable.
Read more on