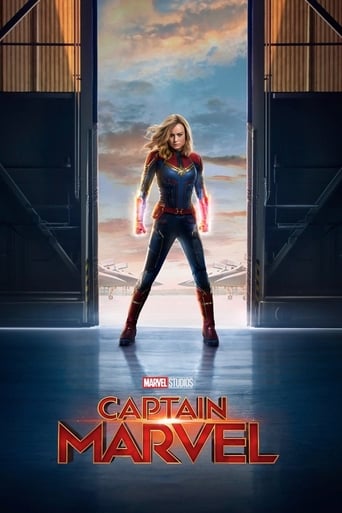 Daniel Jones 1 year ago
A lot of people wanted to hate this just to hate it. Better than many Marvel movies.

Eric Brainard 1 year ago
Another good Marvel movie. Though I like DC's Captain Marvel a bit more. Uh huh.

Tony Gandía over 1 year ago
Thrilling and funny... well-crafted entry to the MCU

Rachel Marshall over 1 year ago
Really great, empowering film with a different take on the lead female role.

Dzenan Suljevic over 1 year ago
It's funny, Brie and Sam are great together, and Goose is an unexpected star of the show!

Noah Rymer over 1 year ago
cliche, lame, predictable, and forgettable. dragged to it by friends.

Andy Whitfield over 1 year ago
Doesn't break the Marvel formula but that's okay - enjoyed every minute of the film.

Sydney Stene almost 2 years ago
Top-Gun: In Space is a lot of fun, if predictable, but still impactful and refreshing.

Fernando Olivas 10 months ago
The story follows Carol Danvers as she becomes one of the universe’s most powerful heroes when Earth is caught in the middle of a galactic war between two alien races. Set in the 1990s, Captain Marvel is an all-new adventure from a previously unseen period in the history of the Marvel Cinematic Universe.
Read more on