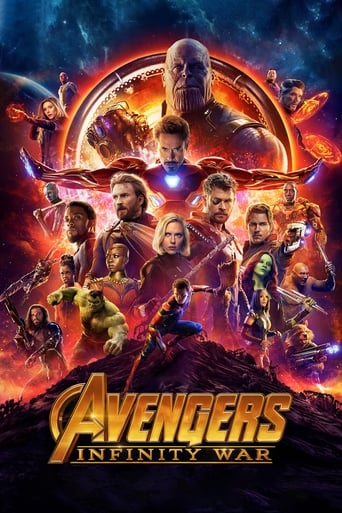 - +
Rate this film
Add a review
Delete Rating/Review Share Add to queue
In your queue
Remove it
Avengers: Infinity War 2018

Alex Silver over 1 year ago
For me, more entertaining than most marvel films.

nicole almost 2 years ago
The slowest of the bunch, but still still pretty great

Tony Gandía over 2 years ago
A perfect Marvel vehicle; everything expected without sacrificing surprises or thrills.

Fernando Olivas over 2 years ago
Fell asleep for most of the movie. I liked the dreams I had though. Would watch again.

Dzenan Suljevic over 2 years ago
Really nice pay-off - or rather beginning of it - for all the time invested in MCU.

Brandy E over 2 years ago
Avengers: Genocide Edition! Way too much going on.

Abigail Rundell over 2 years ago
Good movie but it will be hard to rewatch.

Nick over 2 years ago
Sometimes evil wins. That's life. I don't think the sequel will be able to top this.

Sydney Stene over 2 years ago
Excited to see how they handle the ending. Weird pacing with all the characters.

Andy Whitfield over 2 years ago
Relies on previous Marvel knowledge to hold up plot but character banter is great.

Ryan Boucher over 2 years ago
I'll believe it's an ambitious crossover when star wars characters arrive.

Kayley Sage over 2 years ago
They Game Of Thrones'd us. The Balance Between The Drama & the Humor Was Spetacular.

Grace over 2 years ago
Ok, but now what?

pessimist over 2 years ago
It gets the job done, and nothing more. Excellent by Marvel standards, eh by normal ones.

Daniel Jones over 2 years ago
I mean, it's a good movie. BUT based on 30 year old comics. Marvel needs to evolve.

Alexandra Sundarsingh over 2 years ago
I liked the mash up of all the characters. I hated the ending. Can't imagine the comeback.

Michael Cole over 2 years ago
Avengers: The Empire Strikes Back

Luciana Ducceschi over 2 years ago
This movie is to the MCU as The Last Jedi is to Star Wars except it never misses a beat.

Jenny Forsyth 6 months ago
As the Avengers and their allies have continued to protect the world from threats too large for any one hero to handle, a new danger has emerged from the cosmic shadows: Thanos. A despot of intergalactic infamy, his goal is to collect all six Infinity Stones, artifacts of unimaginable power, and use them to inflict his twisted will on all of reality. Everything the Avengers have fought for has led up to this moment - the fate of Earth and existence itself has never been more uncertain.
Read more on