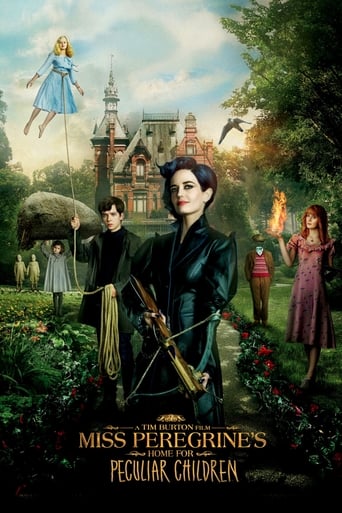 Dee T. almost 2 years ago
Lacked diversity but for someone who hasn't read the book, it was enthralling.

nicole over 3 years ago
Fell a tad flat, but still a good story and well done in parts.

Jacqueline Wenst over 3 years ago
A nice take into time looping and consequences. A lot of compressed information

Robyn Hamilton over 3 years ago
Though I haven't read the book it felt like the film suffered from a poor adaptation.

Nick Fenton over 3 years ago
Clunky as hell

Phetcharat over 3 years ago
Boring. Nothing new.

Holden Johnson over 3 years ago
Enjoyed the whole thing. Some parts were creepy, some awesome.

Aleksandra Bajić over 3 years ago
Expected much more! Wonderful idea, but something is just off.

Michael Cole over 3 years ago
I really loved the world that was built, but the story suffers from poor pacing.

Olivia Lorscheid over 1 year ago

Türkü 2 years ago
A teenager finds himself transported to an island where he must help protect a group of orphans with special powers from creatures intent on destroying them.
Read more on