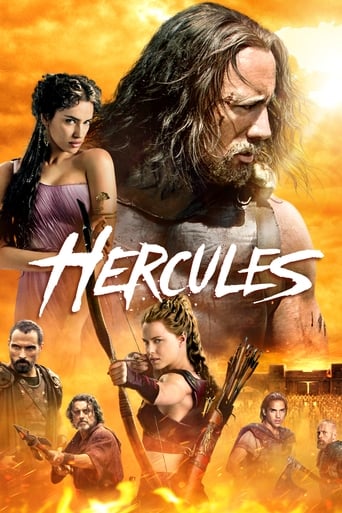 Leonard almost 4 years ago
The new take on 'Hercules' story is a refreshing one actually. Not half bad

Ashleigh Louise Klaassen 4 years ago
Snore fest. Nothing to offer.

Michael Cole 5 years ago
Um, I believe this movie is suppose to be called Conan The Barbarian. Easy mistake to make

Sasha over 5 years ago
Not as bad as everyone says, even if some great actors serve as merely comedic backups.

Daniel Jones over 5 years ago
This film features good action and a different type of take on "man or god?" Worth viewing

Fabio Augusto Vanegas Bovea over 5 years ago
I am watching

Franco Metz over 5 years ago
Freaking bad ass fighting movie with some funny punch lines! Grab a beer and enjoy!

Syed Ashruf almost 6 years ago
Not so bad mythological narration, except that there was war & fight everywhere

oscar diaz almost 6 years ago
Nothing what i expected, but at least it had a twist.

Christopher Leno almost 6 years ago
Very enjoyable action film. No big earth mover but worth seeing big and in 3D.

Daniel Camacho over 1 year ago

Deanna Colt over 3 years ago

Igor Prata 5 years ago
Fourteen hundred years ago, a tormented soul walked the earth that was neither man nor god. Hercules was the powerful son of the god king Zeus, for this he received nothing but suffering his entire life. After twelve arduous labors and the loss of his family, this dark, world-weary soul turned his back on the gods finding his only solace in bloody battle. Over the years he warmed to the company of six similar souls, their only bond being their love of fighting and presence of death. These men and woman never question where they go to fight or why or whom, just how much they will be paid. Now the King of Thrace has hired these mercenaries to train his men to become the greatest army of all time. It is time for this bunch of lost souls to finally have their eyes opened to how far they have fallen when they must train an army to become as ruthless and blood thirsty as their reputation has become.
Read more on