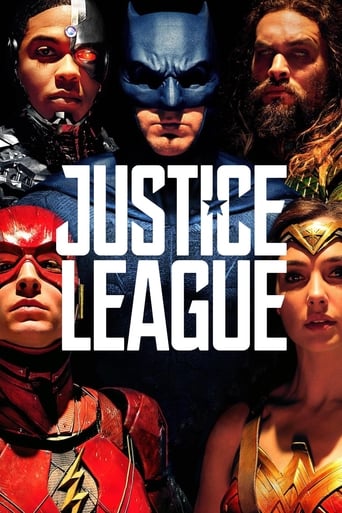 Kayley Sage 2 years ago
A cool script wasted on it's directors, and thatArrivedTooSoon, weNeededMoreFilmsInBetween

Michael Cole 2 years ago
I love The Flash, but he runs like an idiot

Daniel Lanciana 2 years ago
Flash and wonder woman the stars.

Bruno Ferreira Machado 2 years ago
Just OK, nothing really special about it.

Daniel Jones over 2 years ago
Beginning is a bit choppy, but it eventually develops into a fun movie. Good job, DC.

Grace over 2 years ago
Generic plot & introduced too many big names at once. Ok overall but could've done better.

Dónal Kennedy over 2 years ago
Faded from memory as the credits rolled. Miller is decently charming.

dominic garvin over 2 years ago
avoid

LANX 12 months ago
Fueled by his restored faith in humanity and inspired by Superman's selfless act, Bruce Wayne and Diana Prince assemble a team of metahumans consisting of Barry Allen, Arthur Curry, and Victor Stone to face the catastrophic threat of Steppenwolf and the Parademons who are on the hunt for three Mother Boxes on Earth.
Read more on