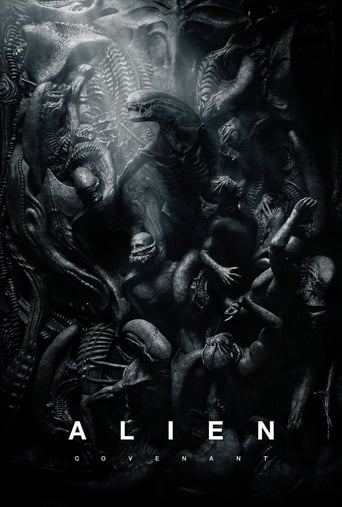 - +
Rate this film
Add a review
Delete Rating/Review Share Add to queue
In your queue
Remove it
Alien: Covenant 2017

Robyn Hamilton almost 3 years ago
The characters were frustrating in their levels of freakish stupidity.

Michael Cole almost 3 years ago
May have been an ok standalone Alien movie, but did a poor job building off of Prometheus

Grace almost 3 years ago
Fascinating to watch right after Prometheus. I recommend watching them back to back.

Daniel Jones over 3 years ago
I tried so hard, but just couldn't get through this one. Was really looking forward to it.

Athena over 3 years ago
A nice expansion of Prometheus but nothing special. Very Alien-ish and boring at times.

Dzenan Suljevic over 3 years ago
I'm not very happy with the direction they took the series in, but it's still interesting.

Charlie Alcock over 3 years ago
There's at least 8 different ways this movie is weird.

Neil Cooke over 3 years ago
Yep. Good! Liked a lot.

Andras Iani over 1 year ago

Katie over 1 year ago

Federico Touriñan over 2 years ago

Ivana Marjanovitj over 2 years ago
Bound for a remote planet on the far side of the galaxy, the crew of the colony ship 'Covenant' discovers what is thought to be an uncharted paradise, but is actually a dark, dangerous world – which has its sole inhabitant the 'synthetic', David, survivor of the doomed Prometheus expedition.
Read more on