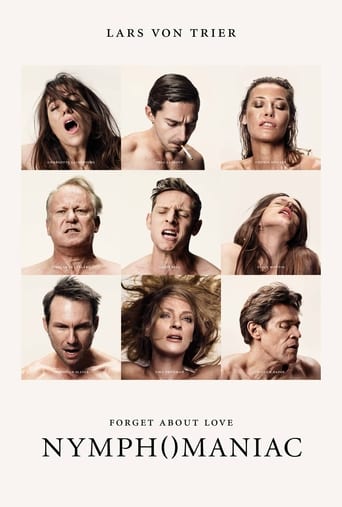 Damian Campo over 3 years ago
A beaten girl is found by a stranger. She starts telling him about her conception of sex.

Cveti Kalcheva 4 years ago
A solid 3/5. Von Trier knows how to make the viewer uncomfortable.

Robyn Hamilton over 4 years ago
A live action reenactment of Lars Von Trier's twisted Sims gameplay. This is not real.

Jack Genius 5 years ago
Rather interesting.

Lindy Oates over 5 years ago
Really interesting at first but by the end the story and the jokes had run thin.

Dzenan Suljevic over 5 years ago
Interesting tale, but it's too heavy for me. Not a fan.

Sedefnur Şahin over 5 years ago
Couldn't like it, I don't know why.

Gavin Klein over 5 years ago
The first volume was much better but overall a very interesting film.

Henry Cropper almost 6 years ago
study of the ideology of sexual behavior comparing it to fishing and music..interesting

Mario Schievenini almost 6 years ago
Hardcore story but visually it's a masterpiece. Intersting how Lars linked it to fishing.

Paula Sullaj over 6 years ago
A new angle of seeing and understanding those who we 'exclude' for their own preferences.

emilio murillo over 6 years ago
Great, steady development of a most original and lonesome character. Visually masterful.