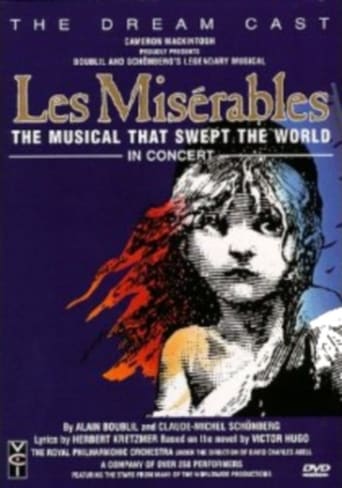 1
0
0
Rate this film
Add a review
Delete Rating/Review Share Add to queue
In your queue
Remove it
Les Misérables: The Dream Cast in Concert 1998

Colm Wilkinson, Philip Quast, Ruthie Henshall, Jenny Galloway, Michael Ball
Rate this film now
Write a short review
Les Misérables: The Dream Cast in Concert a.k.a. Les Misérables in Concert is a concert version of the musical Les Misérables, produced to celebrate its 10th anniversary. It was filmed in October 1995 at the Royal Albert Hall and released on DVD and VHS in 1998 and re-released on DVD in North America in 2008. It stars Colm Wilkinson as Jean Valjean, Philip Quast as Inspector Javert, Michael Ball as Marius Pontmercy, Lea Salonga as Éponine, Judy Kuhn as Cosette, Ruthie Henshall as Fantine, and several others, and was directed by John Caird. The performers were chosen from London, Broadway and Australian productions of the show.
Rate this film Cancel Rating
Ok. Add review?
Add a review
Share Add to...