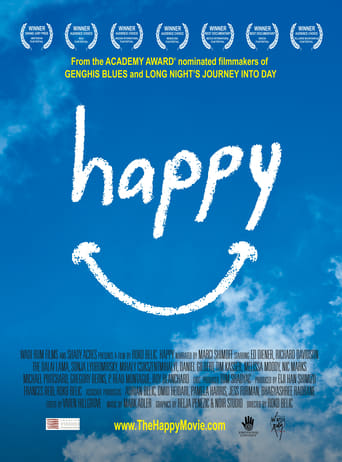 Evan Light 7 years ago
Would have rated higher but for my previous knowledge of positive psych. Recommended.

Ghiz Lane over 4 years ago

Goldfish. over 4 years ago

We's Kbul over 5 years ago

Hiram Soto over 5 years ago

Frank Fitzpatrick over 5 years ago

Si Quick over 5 years ago

Emily over 6 years ago

Rob Thompson over 6 years ago

Carlene Elizabeth over 6 years ago

Jennifer Stewart over 6 years ago

Alexis over 6 years ago

Ingrid Segrov over 6 years ago

chloe matthews 7 years ago
Happy is a 2011 feature documentary film directed, written, and co-produced by Roko Belic. It explores human happiness through interviews with people from all walks of life in 14 different countries, weaving in the newest findings of positive psychology. Director Roko Belic was originally inspired to create the film after producer/director Tom Shadyac (Liar, Liar, Patch Adams, Bruce Almighty) showed him an article in the New York Times entitled "A New Measure of Well Being From a Happy Little Kingdom". The article ranks the United States as the 23rd happiest country in the world. Shadyac then suggested that Belic make a documentary about happiness. Belic spent several years interviewing over 20 people, ranging from leading happiness researchers to a rickshaw driver in Kolkatta, a family living in a "co-housing community" in Denmark, a woman who was run over by a truck, a Cajun fisherman, and more.
Read more on