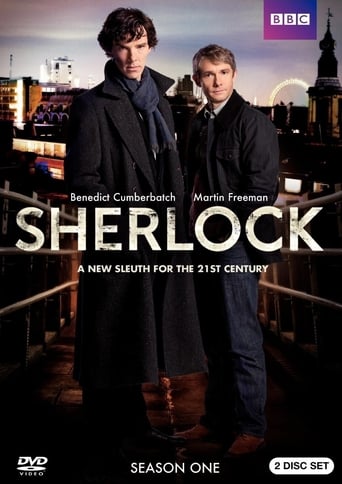 Alexandra over 3 years ago
Simply one of the best series to ever exist.

Katy Eller 4 years ago
I didn't think it would be as good as it is. It is captivating & exhausting & so great.

Geri R. over 4 years ago
No one should ever miss this. What can I say? It's brilliant!

Leif Jacobson almost 5 years ago
A brilliant and fun incarnation that brings the caustic genius into the 21st century.

Rachael MacLean almost 6 years ago
Great series! Irene Adler episode was disappointing but everything else is great.

Tina 6 years ago
Smart is the new sexy

Natasha Marchev over 6 years ago
no reviews

Adam Connell over 6 years ago
Is it really a television series? If so it's the best one on today, period.

Nara Bruck over 6 years ago
One of the best shows at the moment!!!

Karen Dillon over 6 years ago
Smart and sexy, loved every episode.

Taryn Chambers over 6 years ago
Utterly brilliant Sherlock Holmes set in modern-day London. Gorgeously, endlessly clever.
Mycroft wants his brother Sherlock to investigate the murder of civil servant Alan West and theft of the Bruce-Partington missile plans. Sherlock,however,prefers to assist Lestrade following a massive bomb blast. The sadistic bomber abducts a string of hostages,who will be released after Sherlock has solved a series of puzzles,including a twenty year old murder and two insurance scams,the second involving an alleged art theft. The gallery owner tells Sherlock she was approached by a criminal who claimed he could make money for her - his name being Moriarty. He is the arrogant bomber. Sherlock solves all the puzzles and the West murder before confronting Moriarty,a seemingly innocuous man he has met before,at a swimming pool.
Rate this film Cancel Rating
Ok. Add review?
Add a review
Share Add to...