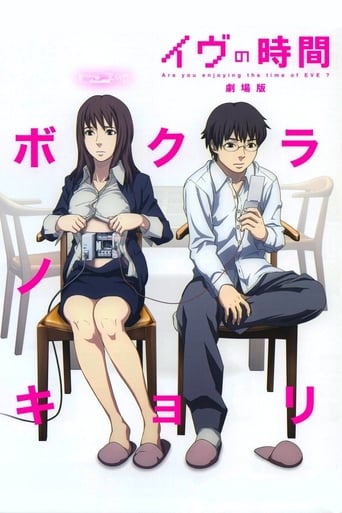 William Soares over 7 years ago
Good. But it has a quite disappointing end.

Brie over 3 years ago

Bloc Silent over 4 years ago

D Fishcer over 5 years ago

Graphittie in Wonderland over 7 years ago

Gab. over 7 years ago

Tama Chan over 7 years ago

Patrick Oliver over 7 years ago

Blanca Aurora M. E over 7 years ago
A theatrical feature-length version of the six-part web series Eve no Jikan. Featuring additional new scenes. In the near future, probably in Japan, long after robots have been put to practical use, and not so long since human-type robots, or androids have appeared. Due to the Robot Ethical Committee, people take it for granted to treat robots as electronic appliances. However, because of their human appearance, except for the halos above their heads, some humans - called "dori-kei" (android-style) - are becoming too attracted to these androids, and this is causing new social problems.
Read more on