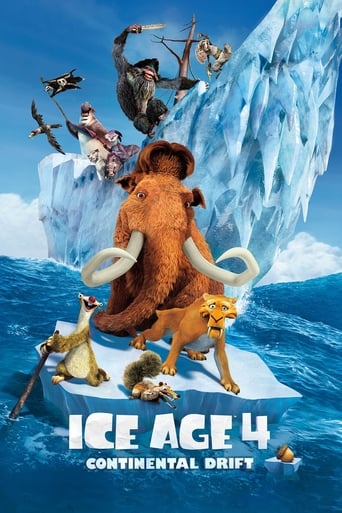 Kittypuff over 6 years ago
Decent, at best...Ice Age worsened as crappy sequels upon crappier sequels were made

miftahul mahfuzh over 6 years ago
good

Rowan Humphreys almost 7 years ago
A terrible milk of the original plot, TERRIBLE !!!

Josh Steadman over 7 years ago
Stop making sequels of everything. Not even sure the kids will like this very much.

Lucas Silva-Myles over 7 years ago
Delivers what it promises + a pretty good musical number. Don't look for anything more.

Ben Dauphinee almost 8 years ago
Nope. Can't even get through 20 minutes of it. Only for kids.

Isaac Matthew almost 8 years ago
I hate you Blue sky

Paula Maddern 8 years ago
Once again laugh out loud, good fun. The addition of Granny is genius! Look forward to "5"

Lauren Armstrong 2 years ago
Ice Age: Continental Drift, also known as Ice Age 4, is an upcoming American 3-D computer-animated film directed by Steve Martino and Mike Thurmeier, starring the voices of Ray Romano, John Leguizamo, Denis Leary, Queen Latifah, Seann William Scott, Josh Peck, with Chris Wedge and Jeremy Renner. It is the fourth installment of the Ice Age series, being produced by Blue Sky Studios and distributed by 20th Century Fox. It will be the second Ice Age installment that will utilize Digital 3D and the first entry in the Ice Age series to be released in IMAX 3D. It's scheduled for a worldwide release in theaters on July 13, 2012. This will be the first Ice Age film to be shot in the 2.35:1 aspect ratio. The official synopsis added to Apple Trailers follows One of filmdom's most beloved trios - "Ice Age's" Manny, Diego, and Sid - embark upon their greatest adventure after cataclysm sets an entire continent drift. Separated from the rest of the herd, they use an iceberg as a makeshift ship,...
Read more on