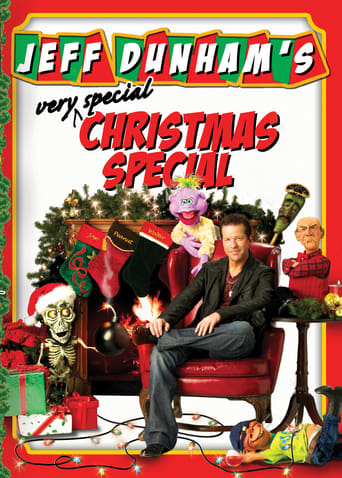 Dylan Clites over 7 years ago
Jeff Dunham's lovable characters have become a Christmas viewing tradition in my house.

David Anderson over 7 years ago

Daniel Jones over 7 years ago

Ana Karina Ochoa over 7 years ago

Daphne Wigger over 7 years ago
Jeff Dunham's Very Special Christmas Special is the third Jeff Dunham special. It was taped at Pabst Theater in Milwaukee, Wisconsin and premiered on Comedy Central on November 16, 2008. It was released on DVD November 18, 2008. Dunham also released his first music album, Don't Come Home for Christmas, on November 4, 2008. It contains original Christmas songs as well as a parody of "Jingle Bells" (sung by Achmed the Dead Terrorist) entitled "Jingle Bombs". All of the songs (except "Jingle Bombs") were written and accompanied by Brian Haner, who has recently joined Dunham's act as "Guitar Guy". Bubba J made his return in this special, singing "Roadkill Christmas". The special was released on DVD and Blu-ray Disc. Jeff Dunham released his first album entitled, Don't Come Home for Christmas. The album had the same theme as the special and was released around the same time. "Jingle Bombs" and "Roadkill Christmas" were the only songs in the album that were featured in the special.
Read more on