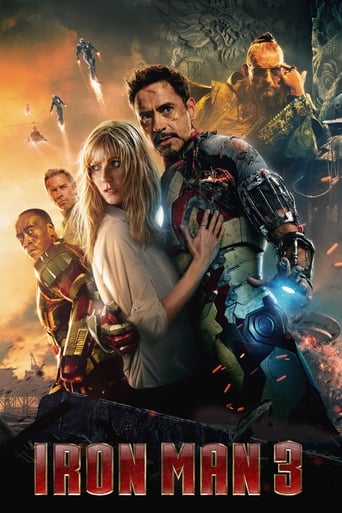 Eric Brainard 5 months ago
War Machine & Paltrow as Ironheart? Best one if they're all in it. I forgot, been awhile.

Amanda Mathews over 2 years ago
Great addition to the Iron Man story. Marvel does what it knows best.

Freddie Kay over 3 years ago
"Iron Man 3 is a pretty good film was some highs and lows."

Murat Çimen over 4 years ago
Mehhhh

Christopher McLean over 4 years ago
Another great film, not on the level of the first but still good fun.

Leif Jacobson over 4 years ago
A bit more empty-headed than the first, still a good bit of superhero fun.

Earnshaw Jean Louise over 4 years ago
Great plot, love the romance, and a wonderful ending.

Ida Ayu Utari almost 5 years ago
Better than Iron Man 2 but not as good as Iron Man.

diane 5 years ago
After watching all 3, this does a good job of ending Tony's arc as a character. Good booms

Tony Gandía 5 years ago
A step up from IM2. Loud, bombastic IM3 is Downey Jr's film to save & he does so with wit.

Kuba 5 years ago
In comparison to prevoius parts, Iron Man 3 is the worst.

Joshua Kessler over 5 years ago
no plot. worst of the marvel films.

Dzenan Suljevic over 5 years ago
Where is Iron Man?