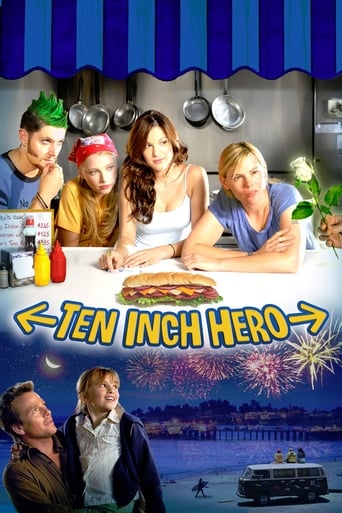 Amanda Mathews over 2 years ago
Witty, fun and definitely something I enjoyed more than I thought I would.

DDog almost 3 years ago
I wanted to like this more than I did. Great cast.

Elisabeth over 5 years ago

Wilma Monaghan over 7 years ago

Kimberly Hurlbut over 7 years ago

erin over 7 years ago

Tyler Perry over 7 years ago
Ten Inch Hero is an independent romantic comedy film completed in 2007. The film was directed by David Mackay and written by Betsy Morris. The Ten Inch Hero of the title refers to a large submarine sandwich. The story revolves around the young student Piper, who moves to Santa Cruz to find her daughter, who she gave up for adoption 8 years ago to a woman who said her husband was named Noah and that she named the baby girl Julia. Piper gets a job at local sandwich shop and meets the other employees; Jen, a shy but kind girl who has an email romance with a stranger known as Fuzzy22, but is too afraid to meet him in person. Tish is the outspoken one who has a new man every night and doesn't bother falling in love because she thinks it's too risky. Priestly is the free-spirited goth of the gang who uses humor to hide his own feelings and emotions. The shop is owned by Trucker, a surfer child of the '60s who's in love with Zo, the mysterious woman and owner from the shop across the street....
Read more on